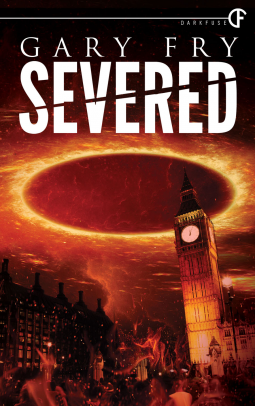 A zombie novel? By Gary Fry? Surely not... For an author renowned for quiet, philosophical horror, that particular sub-genre would seem, on the face of it, a strange choice for his latest publication from DarkFuse. Why, it's like Dylan going electric or Robert De Niro pissing over his legacy by moving into shit comedies... Whilst the latter is, and will always remain, unforgivable, I actually preferred Bob Dylan when he picked up his Fender and I'm pleased to say that my feelings at Gary's move into more traditional horror tropes are equally as positive.
That's because Severed is absolutely trademark Fry, thus time using the well established zombie mythology to provide another contemplation of philosophical theory. Yes, there's plenty blood and gore on display here after a mysterious package in a London store releases a zombie plague but no sooner have you said "cogito ergo sum" than we're knee deep in not only guts but theories of dualism and Cartesianism.
I'm guessing there are few horror novels where the hero is a social scientist but that's the case here. Actually, hero is probably the wrong word, protagonist would be better as the former suggests a nobility that is most assuredly lacking in the character of Stephen Hobbs (and anyone who's seen Quatermass and the Pit will raise a smile at that particular surname) who, as well as having a doctorate in Behavioural Sciences seems to have a sub-speciality of arrogant twattery. Hobbs is not a sympathetic creation and full credit to Gary for using such an awful main character to anchor the book. There are reasons for his defects of course, which are hinted at throughout the story and finally revealed at the end. Those reasons provide context which means you'll understand why Hobbs is the way he is. You still won't like him though.
It's Hobbs who is brought in by the Government as an adviser once the outbreak has been brought under control by quarantining those affected within the city. The transformative process from human to zombie has been identified as a "severance" - a splitting of the body and the mind, the former becoming the zombies which roam the streets, driven by base instincts, the latter ascending to the sky in the form of ghost-like spirits that encircle the city - a marvellously creative image which graces the book's cover.
And it works. The philosophical theory really does provide a believable explanation of what is happening - it's such a good fit that I'm surprised no-one's done it before.
As a thesis then, the theoretical framework is robust. I have to say however, there are a few flaws in the methodology. The source of the outbreak is actually a MacGuffin but I felt that the discovery of its nature and the antidote was handled a wee bit superficially. Of course there's the risk of bogging the reader down in too much technical jargon but I felt this whole section of narrative was underdone, finding the "cure" was too easy. There are a couple of set pieces that seem bolted on and which aren't fully developed (the bombing of a major London landmark and a mindless banker (is there another type?) bringing about financial ruin at the press of a button) and I felt two of the key characters were underdeveloped, serving only as devices to allow plot developments. The first, scientist Penelope Chambers, features in a key moment but by doing something that seemed out of character and a wee bit hard to accept whilst the second is "the military man" who I felt was a little too stereotypical in his actions. Interestingly, he is never named - possibly, in so doing, the author is acknowledging the role he plays in the narrative.
Criticisms aside, Severed is a thoroughly entertaining read, one which skillfully mixes the visceral horror you'd expect from a zombie book with intellectual concerns, the two facets sitting alongside each other perfectly.
Whether it's reasoned argument or gut instinct that informs your decision making, you really should buy Severed, it's a cut above the rest.