In the Valley, Where Belladonna Grows. 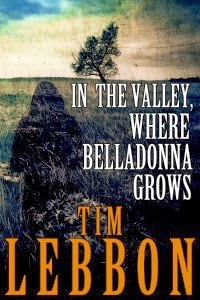 I have to confess that when I read the novella Still Life from Spectral Press, it was my first encounter with the work of Tim Lebbon. On the strength of that book, and given my enjoyment of it, I sought out more of Tim’s writing and as a result find myself currently nearing the conclusion of Coldbrook – a hefty tome but one which I’m flying through, faster than the spread of a zombie plague. Listed within the book are all of Tim’s other publications – an extensive back catalogue that, whilst whetting my appetite greatly with the prospect of some wonderful reading ahead also made me wonder how I’d managed to miss so many books for so long.
Working through that back catalogue is something I’m very much looking forward to and so it was with great pleasure that I discovered that Tim has set up his own enterprise in the form of Dreaming in Fire through which he will be publishing electronic versions of some of his short stories and novellas.
Figuring that it wouldn’t be the end of the world if I did, I took a break from the breakneck pace of Coldbrook to sample one of these newly resurrected stories, In the Valley Where Belladonna Grows.
The story focuses on Mary, living a life of isolation in a remote valley. What at first seems an almost idyllic existence turns into something more sinister as information is slowly drip-fed to the reader – it seems Mary’s isolation has been enforced, she has been exiled from “the city” by none other than her husband, Sherlock, a man who has achieved status and power through less than reputable means.
It seems that the years of exile are over however, as a series of emissaries from the city are sent to persuade Mary to return…
In the Valley… is a story of changing perceptions, playing with expectations, presenting a scenario which raises questions in the reader’s mind and then slowly reveals information that offer clues and suggestions as to why Mary is where she is.
Or does it?
Certain aspects of Mary’s situation don’t seem to ring true – in particular, it’s stated that she hasn’t seen another human being for sixteen years which begs the question of how far removed from society can she actually be? It’s a clever device, planting the seeds of suspicion in the reader’s mind that all is not what it may seem. Much is made of the presence of Belladonna growing in profusion around Mary’s homestead, a plant well known for its hallucinogenic, as well as poisonous properties. Dreams and visions (of a generally post-apocalyptic nature) are woven into the narrative and add to the feeling of uncertainty - are her visitors real or imagined, and what of the wild dogs that terrorise the surrounding countryside? Are all of her experiences actually happening or simply the products of her own imagination – brought on by loneliness and isolation or the insidious influence of the Belladonna?
To say more would be to potentially spoil what is an extremely cleverly written story. Its conclusion is eminently satisfying and will cast a whole new light on all that has gone before. It will probably make you want to read it again so you can see just how clever it actually is. I did. (And it is very clever).


The idea to re-release a back catalogue in this way is one I heartily applaud and I look forward to more from Dreaming in Fire, especially if they are of the same high standard as In the Valley…
Posted by Anthony Watson at 09:20

Email ThisBlogThis!Share to TwitterShare to FacebookShare to Pinterest
Labels: Dreaming in Fire, In the Valley Where Belladonna Grows, review, Tim Lebbon