Drunk on the Moon. 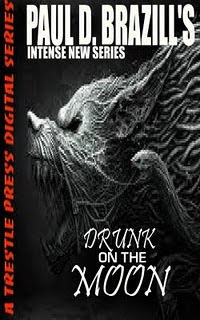 I've never gotten into Tom Waits. I know I should, just so I can prove that I really "know my stuff" and can impress others who take their appreciation of music VERY SERIOUSLY. Trouble is - as much as I've tried - I just can't listen to Mr Waits without thinking that he's putting a silly voice on when he's singing and that somehow prevents me appreciating the undoubted skill and artistry behind his compositions. I do like Radiohead though...


Anyway, I may not get off on his music but I do know that one of his songs is Drunk on the Moon - a title shared by a new short story by Paul D Brazill. It's main character is ex-Police Detective Roman Dalton, now a Private Investigator - who just happens to be a werewolf too.


The story is a beautifully written piece of noir, employing the sardonic first person narrative to great effect. If I'm being picky, Brazill uses the phrase "a murder of crows" twice in the story and describes the moon as gibbous the same number of times - and with the story being so short the second appearance of both jarred a little. This is a minor quibble though as the writing throughout is of the highest quality, mixing humour and horror extremely effectively.


This appears to be the first in a series of stories and it does read like that - the "origins" story if you like, introducing the character and giving some back-story. There aren't any real twists and turns (something I kinda expect with noir/PI stories) - the plot mainly describes Dalton's unique way of dealing with situations - but hopefully there'll be more of this in future stories. The real joy of this story isn't so much the plot as the language itself - it's the journey, not the destination if you will.


I enjoyed Drunk on the Moon very much (not least because it contains my favourite Absinthe joke) and I look forward to further stories in the series.
Posted by Anthony Watson at 15:32