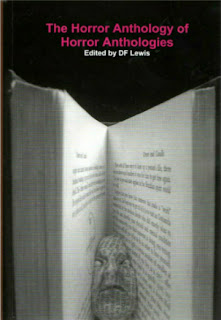 The Horror Anthology of Horror Anthologies is edited by DF Lewis and published by Megazanthus Press and is a compilation of twenty stories with a common (loose) theme of containing a horror anthology in its plot, thus allowing a nice play on words to provide the title of this collection.

The stories showcase a wide variety of styles and interpretations of the theme. Perhaps the most interesting of these interpretations is Tree Ring Anthology by Daniel Ausema that uses the pattern of rings in a tree trunk to chart significant events over the course of many years - including a nuclear holocaust and what appears to be the appearance of extra-terrestrial life forms. It's a clever story, beautifully written and even manages a sting in the tail.

A few of the stories left me cold and/or wondering what they were about (not something I'm afraid to admit to!) and a couple were a wee bit too long, almost approaching novella length. A couple (Tears of the Mutant Jesters by Rhys Hughes and Paper Cuts by Nick Jackson) veer a little too close to surrealism for my tastes. Couching a story in a bizarre framework tends to detract from any horror - which is, in my opinion, enhanced by basing the story in reality. Two stories that do this extremely effectively are Horror Stories For Boys by Rachel Kendall and Midnight Flight by Joel Lane, the former an excellent examination of the consequences of childhood trauma.

The two best stories of the collection for me are The Rediscovery of Death by Mike O'Driscoll which uses the classic trope of a haunted/cursed book but does so in a stylish way in a beautifully paced story that leads to a climax that - if not entirely unexpected - is extremely satisfying. Flowers of the Sea by Reggie Oliver follows that story and is my favourite of the collection. A slow burning story it uses a first person perspective from a not entirely sympathetic narrator and conjures up images in its climax that are truly unsettling.

I have to give an honourable mention to Clayton Stealback for his story The Writer. I've known Clayton for a few years now and have enjoyed everything he's written. He very kindly asked me to have a look at the first draft of The Writer before he submitted it which I was more than happy to do. A requirement of submitting for this anthology was to have had a story reviewed by Des Lewis and Clayton qualified because of his story in the Dark Minds anthology. Because of my involvement with the story I feel I can't give an unbiased review of it. It is a cracker though. Really, it is.

All in all this is a strong collection with enough variety of style and subject matter to appeal to the majority of readers. A couple of typos aside (Sophia Lauren? and a couple of instances of words meant to be italicised left underlined as per the original manuscript) it's a high quality product with an amazing cover image.