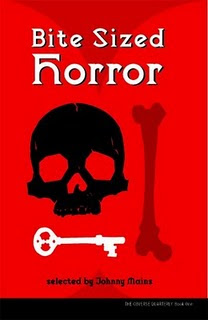 Bite Sized Horror is a selection of six short stories selected by Johnny Mains and published by Obverse Books.

The Brighton Redemption by Reggie Oliver opens the collection and is a pastiche of a Victorian ghost story, a series of extracts from the journals of the Rt. Rev. Cyprian Bourne-Webb, on his first post-ordination appointment to Brighton. It's difficult to imagine writing a period piece not in the style of the time but it takes a good writer to pull it off - it's too easy to fall into the trap of showing off, letting the reader know just how much research ahs been done in the pursuit of authenticity and somehow losing sight of the basic need to tell the story, style over substance in effect. That is most certainly not the case with The Brighton Redemption and Reggie Oliver has created a story that is full of atmosphere, strongly drawn characters and some genuinely chilling images. Even the dream sequences - all too often a horror cliche, an easy way out - are effective (very effective in fact). It's a strong start to the collection, a story I enjoyed very much.

The Between by Paul Kane tells the story of Joe whose day starts badly at his divorce lawyers then gets a whole lot worse when he becomes trapped in a lift. From fairly mundane beginnings the story changes direction completely once Joe (and the small group with him) become trapped. I'm not too sure about this one - the main body of the story is a roller-coaster adventure, a bit like a seventies disaster movie (who lives, who dies..?) but then at its conclusion it becomes more profound. I liked the ending more than the rest of the story leading up to it but don't think it works overall - introducing the concept of "The Between" (albeit an interesting one) doesn't sit comfortably with all the narrative driven stuff that precedes it.

His Pale Blue Eyes by David A Riley is the third story in the collection and - truth to tell - had me groaning inwardly as I started to read it as the dreaded Z-word made its appearance in the third sentence. I'm not too sure where my anti-zombie prejudice came from but it's possiby that I think - as monsters go - they're fairly limited in their horror potential. They eat you - that's pretty much it, the horror is generated from attempting to gross the reader out, not something that does it for me. Also, they seem to be "flavour of the month" right now and that always runs the risk of quality plummeting as writers collectively jump on the bandwagon.

I'm pleased to say, however, that I really liked David's story. It approaches the zombie apocalypse trope from a slightly different direction, focussing on the human survivors, and in particular a young girl called Allison. The zombies are there right enough (plus some survivors trapped on a store roof - ? a nod to Dawn of the Dead) but the real horror of the story comes from the actions of humans, not the shambling flesh-eaters. The title of the story is its last line too - and its a very, very effective one at that.

The Unquiet Bones by Marie O'Regan had me groaning as I started reading it too - a couple's car breaks down in a remote location outside a spooky old building. Unfortunately, unlike the previous story, I groaned all the way through this one as the cliches just kept on coming. Cliches and iconography are okay in small measure, they're familiar to all readers of horror fiction and can help cement the template of the story - they're almost reassuring sometimes - but to construct a whole story around them, and not bring anything new to them, is something I find disappointing. This story also contains a lot of another bug-bear of mine, having the evil creature/monster/nemesis spouting a load of exposition. "Yes, I'm going to kill you and wreak havoc in your world but first I'm going to tell you a little about myself..." I'd like to think the story was an exercise in post-modern irony but I'm not entirely convinced...

The Rookery by Johnny Mains is the shortest story in the collection but in my opinion is vying for consideration as the best of them all. Of all the stories it's the one most grounded in reality - and is all the more effective for that. Roger is a gamekeeper whose life has become one of misery, damaged by his divorce. His only solace comes from the bottle or seeing his son Sean. The description of Roger, his life, his views is brilliantly done and it's all too apparent that things aren't going to end well. The conclusion may be expected but Mains delivers it with a panache and flair in a scene that is totally unexpected given the tone and style of what has gone before.

The Carbon Heart by Conrad Williams is the story of MacCreadle, investigating the disappearance of Jenny's father. In the same way that The Brighton Redemption followed the conventions of style for a Victorian ghost story, so too does The Carbon Heart, written in first person and having a noir-esque feel to it. The erupting volcano in Iceland provides plenty of atmospheric background to the story - both literally and metaphorically and I think this is my favourite story in the book. The scene where MacCreadle interviews the driver involved in a car accident is reminiscent of a similar passage in Gary McMahon's Pretty Little Dead Things. It's a powerful story in which the strangeness and supernatural elements creep up on you slowly and has an ending which puts everything you've read previously into a whole new perspective.

All in all this is a strong collection with a good variety of subject matter and styles.
Posted by Anthony Watson at 14:36