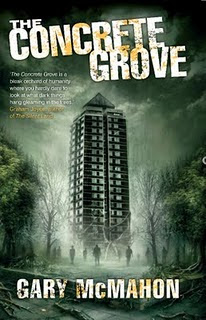 I can't tell you how nice it was to walk into Waterstones, head downstairs to their Horror section and find not one, but two copies of Gary McMahon's new book. (An event made all the sweeter by the fact that the copy I pre-ordered from Amazon ages ago still hasn't arrived). Gary is destined for great things so it was great to see tangible evidence of his first steps into the "big time."

The Concrete Grove is a housing estate in the North East of England that has become home to Lana and her daughter Hailey. It's home too to something much older and darker, something that is breaking through into the reality of the present day with unimaginable cosequences. (A theme explored in one of his earlier novels Rain Dogs).

Unimaginable, that is, unless you're Gary McMahon who does a superb job of combining the ancient supernatural elements with the contemporary horrors of modern life.

Anyone who's read How To Make Monsters will already be familiar with Lana, Hailey and their nemesis loan shark Monty Bright as they appeared in one of the stories in that collection called Owed. That story appears within The Concrete Grove, this time used as a pivotal scene that acts as a catalyst for the denoument of the novel. Also appearing in Owed were the Slitten - the role hinted at for them in the short story fully fleshed out in the novel.

A strength of all Gary McMahon's writing is his ability to create fully believable characters and this skill is displayed in spades in The Concrrete Grove. These are real people he's describing and even the "good guys" are flawed, not everything about them is sympathetic and the arcs they follow are dramatic but completely believable.

There's some startling imagery in here (plus some gore) and I particularly liked the use of hummingbirds as the connection between Hailey and the forces lurking in the Grove. There's plenty mythology around these birds in connection with the soul (does it really weigh 21 grams?) and they are used to very good effect in the story not least by providing a vivid contrast between something so beautiful and yet at the same time sinister.

This is a great book, one I enjoyed very much and firmly establishes Gary McMahon's position as one of the best writers of horror fiction currently working. I vey much look forward to the next two books in this planned trilogy and also to the next Thomas Usher story, Dead Bad Things.

I strongly recommend The Concrete Grove.