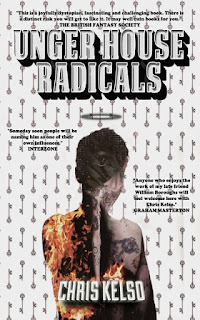 Imagine, if you can, asking someone who’s just taken a tab of speed what they think art is. There’s a good chance their answer will be similar to the contents of the new novel from Chris Kelso, Unger House Radicals, which is published by Crowded Quarantine Publications. Which sounds like a criticism – but isn’t – it’s simply the best analogy I can come up with for one of the strangest, and best books I’ve read in quite some time.
In truth, there aren’t enough –isms to describe it, take your pick from nihilism, existentialism, cynicism and a whole host of others. Closest to the point is probably that hoary old standard of post-modernism and there’s no doubt that this novel displays all the trademarks of that particular movement from its fractured narrative (what narrative there actually is: there’s a beginning and a middle – not necessarily in that order – but no real end, at least not in the classic sense of the word) to its liberal sprinklings of references to luminaries in the field (Baudillard, Duchamp, Rothko) and its use of multiple viewpoints, characters and media. It’s a stunning display of imagination and skill, a meta-metafiction which raises a multitude of questions about the role of art and its relationship with reality. It’s a work of fiction and yet reads almost like a thesis, an analysis of art via a critical realism approach.
Have I sold it to you yet?
Vincent Bittaker is a film student, eager to make a name for himself, who serendipitously meets up with Brandon Swarthy, a serial killer with multiple personalities who shares his dreams of creating a new movement, Ultra-Realism, and with whom he begins an intense relationship much like Rimbaud and Verlane did back in the 1850s. Unger House is the location in Louisiana where their magnum opus will be filmed.
Death is the only true reality and so art, if it is to be regarded as authentic must mirror that reality – such is the thinking of the two as they prepare to commit murder in the name of said art. Rothko once claimed that “the exhilarated tragic experience is … the only source of art” and this proposition is taken to the nth degree as the two kidnap and kill a girl, filming her brutal murder. This scene is described in vivid detail in the book, and is truly horrifying – as it should be. It’s a tough scene to read and yet I carried on, the emotions I felt those of disgust – and in effect, by so doing, became proof of, and complicit in, the couple’s twisted philosophy. I read horror fiction to be entertained… Except, of course, these are fictional characters, there is no philosophy, there are no Unger House Radicals.
This book seriously messes with your head.
The murder, with a few scenes following, pretty much marks the end of the main narrative thrust of the book, with the remainder taken up with a series of vignettes featuring different characters. The film, unsurprisingly, achieves cult status and the individual storylines which conclude the book – a bold move by the author it has to be said – cleverly throw light on the impact the film has on society, and whether or not its creators’ original aims have been realised.
Unger House Radicals is a difficult read – but only because of its subject matter, the writing here is of the highest quality and the way the book has been constructed is nothing short of amazing. A comparison to the film Natural Born Killers is perhaps appropriate, Swarthy is certainly a psychopath and Bittaker obviously shares some of those traits, but there are also similarities in their construction; the film uses different film stocks, camera equipment and so on to create its discussion of the links between violence and the media and the ways in which both influence each other. A similar argument – this time between violence and art – is made in the book, this time using literary, rather than filmic devices.


Unger House Radicals is quite unlike anything I’ve ever read before. This is a good thing. It blew me away with its style and approach and I strongly recommend that you read it too.
Posted by Anthony Watson at 10:29