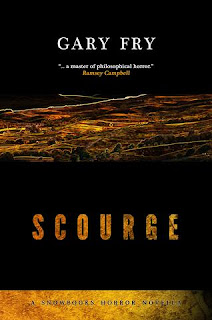 Scourge is the latest novella from Gary Fry and is published by Snowbooks.. It’s another potent blend of philosophy and horror, telling the tale of Lee Parker, a working class boy from Bradford made good having earned a PhD in psychology at Oxford. Gleefully ignoring Thomas Wolfe’s warning, he does go home again, returning to the city of his birth for a meeting on – ironically (or not, ha ha!) - social mobility.
Here he bumps into an old schoolfriend, John Marsh whose work on a building site has led to an eerie encounter with a strange creature, not quite human, with excessively jointed limbs and yellow eyes. His interest piqued, Lee’s unofficial research uncovers the legend of the Felachnids, hybrid creatures, part spider part cat said to roam the wilds of northern England. Thus, he travels to the village of Nathen, to speak to a local expert and determine whether the creatures are real or just a story spun by the residents – and finds himself drawn into a web of intrigue.
Such is the main thrust of the narrative but, this is a Gary Fry story and so it’s the ideas which are important here, rather than plot. Which sounds like a criticism. It isn’t. There are few who can use allusion and allegory as well as Gary, framing philosophical concepts in an entertaining narrative and such is the case here. Plot devices are a joy to behold when done properly but here, as with so many of Gary’s stories, the plot itself is a device – the means to introduce and discuss philosophical, sometimes psychological topics in an accessible – and yes, entertaining – way.
To be honest, there’s a veritable smorgasbord of ideas going on here (to coin a well-established term from another culture), chief among them – to my untutored mind at least – the ideas of chaos and order and the conflict between them; control and the lack of it. Much is made of drug use in this novella, (Lee himself directly affected by it) with its inherent loss of control and the dangers thereof.
It’s probably the most political piece of Gary’s I’ve read, with much made of the multicultural aspects of Bradford portrayed as a massive positive and references to “fear of the other” – a trait exploited by the Felachnids. There’s a passing reference to Isis and the implication that a minority can, if their methods are potent enough, have a massive influence upon society, again, a tactic put to devastating use by the monsters of the piece.
A symbol is referenced frequently in the novella, a sigil used by the Felachnids. It’s angular shape is given the possible explanation of representing their jointed limbs but the similarity to another, extremely well known symbol is difficult to discount.
Scourge is a first person narrative as, I believe, it has to be – allowing the theories and thought processes of Lee as he uncovers more and more about the Felachnids to be shared with the reader. Inherent within this structure, and pretty much unavoidable however, is the tendency to “tell” rather than “show” and this is perhaps most apparent in a set-piece involving an encounter with one of the Felachnids. It’s a creepy scene –all scuttling limbs and hissing – but would have been perhaps even more effective if told in a third person narrative. A minor criticism however.


I enjoyed Scourge immensely, it’s a book that engages the reader both emotionally and intellectually – and you can’t get much better than that.
Posted by Anthony Watson at 10:16