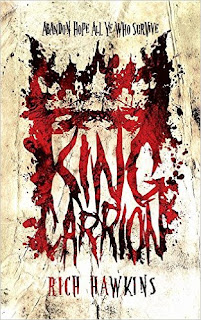 King Carrion is the new novella from Rich Hawkins and is published by The Sinister HorrorCompany. Both author and publisher are on a bit of a roll at the moment with a veritable flood of literary delights washing over the horror landscape. It’s often the case that quantity is inversely proportional to quality but that certainly isn’t the case for Sinister Horror – who are producing some top-notch books – or Rich himself who continues a run of consistently entertaining horror stories with this novella, his take on vampire lore.
The novella opens with a deeply atmospheric prologue set in 49 AD Northern England. It’s a stunning opening to the book which I loved every moment of. There’s much dramatic imagery on display here, and some lovely prose. I loved the line “The wind mourned the loss of another day.” The opening sets the scene brilliantly, and introduces the titular character, a creature of darkness – its face hidden behind swaddled rags, tainted with the smell of death and corruption…
All jolly stuff then, and topped up with a multiple sacrifice. The Romans are coming however, and amongst the many things they did for us was to attempt to wipe out pagan beliefs in their occupied territories and so it is that King Carrion makes his escape, hiding away from the world until the time is right to emerge once again and claim dominion.
It’s a great prologue, and I wish it could have gone on longer but, no sooner is the page turned than we’re transported to the modern day. Enter Mason, an archetypal Hawkins protagonist, a man of sorrows, just released from prison after serving time for causing a fatal road accident. Mason is haunted by the accident, those terrors manifesting themselves in the form of the Dead Girl, the innocent victim of his crime.
Mason’s journey back to see his wife lead him to a town in southern England – at precisely the same time that King Carrion has returned from his self-imposed exile. Cue much gory action and suspense as KC (and his moonshine band) run riot through the streets, converting the populace to vampires.
Nothing sparkles here except the prose; these vampires are vicious, feral beasts who revel in the death and destruction they bring about. These are definitely at the 30 Days of Night end of the vampire spectrum.
There are few who can write an action set-piece better than Rich and he has a field day here, describing the numerous battles with the vampire horde. What makes him an even better writer is that he can handle the quitter stuff with aplomb too. There’s proper emotion going on here amidst the gore.
All things of course lead to a climactic encounter with King Carrion himself at the vampire’s vividly described lair…
I loved King Carrion, a great example of old-school horror delivered with style and gusto. My one criticism of the book is that – as with the prologue – it’s too short. This criticism is two-fold; firstly for selfish reasons – I wanted to spend more time enjoying the book, but secondly because I think the material required a longer form, there’s enough going on here to fill a novel easily.
There’s a scene where Mason glimpses a vision of King Carrion’s past life and experiences which cried out for more detail and, as mentioned earlier, the prologue could easily have been extended. Cramming so much into a novella-length book certainly moves the story along at a cracking pace but the world Rich has created here is one I think would definitely benefit from a higher word count.
This minor quibble aside, I really do recommend that you check this novella out. You’ll have a blast and at the same time enjoy the writing of one of the future stars of the horror writing world. Rich already has an impressive back catalogue and I’m certain this is indicative of great things ahead.


You can buy King Carrion here.
Posted by Anthony Watson at 11:16