A new line of novellas from Hersham Horror Books will be launched at FCon at the end of the month, featuring the talents of Stephen Bacon, James Everington, Mark West and Phil Sloman. I do like me a good novella, and still contend it’s the perfect medium for horror so it was with much pleasure I accepted a kind offer from Peter Mark May to review the books prior to publication. 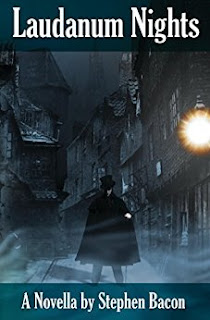 I began my novellathon with Stephen Bacon’s Laudanum Nights, a Victorian-era mystery revolving around missing children and homunculi. It’s a pastiche, but a lovingly created one – with Stephen’s enthusiasm for the time period shining through in the attention to detail and the verisimilitude which results. Atmosphere drips from every page and you can almost smell as well as picture the fictional city of Blackfold and its inhabitants. (Mind you, I can’t remember Dickens or Collins dropping the C-bomb but there’s a couple in here).
It would have been easy to fall into the trap of stringing a series of clichés together – a case of style over substance – but that’s not the case here as there’s plenty of plot to be getting on with and a skilfully drawn protagonist struggling with his own personal issues. The setting is really just context for the narrative, but such a good job has been done in creating it that it enhances the plot rather than distracting from it.
The story itself is a procedural, an investigation into the disappearances of children from Blackfold, a story which reaches its conclusion in a suitably gothic house located in the marshes outside of the city. The denoument is satisfyingly horrific, the explanation for why the children have been taken nasty and creepy. This explanation is provided in an extended expositional dump by the villain of the piece, something I often have problems with but in this case handled very well; the speech is couched in regret almost, rather than braggadocio and as a result works extremely well.
Stephen has hinted that he may return to Blackfold for future stories. Having enjoyed Laudanum Nights as much as I did, I sincerely hope that he does. 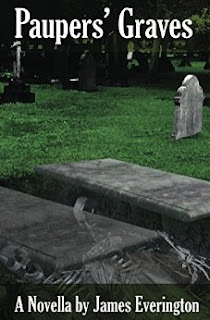 Next up was Paupers’ Graves from James Everington. Unlike Stephen’s story, this one’s set in a real place in the present day. The place is Nottingham although James is at pains to point out in a brief introduction to the piece that it’s the Nottingham he sees when he closes his eyes, not the one he sees looking out of his window.
Specifically, the story is set in a cemetery where a restoration is being undertaken of the area containing the titular graves, a place where those too poor to afford a decent burial were interred.
As part of the project, ream members are given the names of one of the deceased and asked to discover their history in order that they can be put on display – an act of remembrance for those forgotten by society.
The problem, of course, with digging up the past – especially in a cemetery – is that sometimes the metaphorical can become literal. Sometimes the past really can come back to haunt you…
As might be expected from the author of the amazing Quarantined City, this is a story which operates on multiple levels. It’s a story about stories; it’s about society. It’s about truth and the power of words and memories. It’s also about ghosts and hauntings and is very effective in dealing out the thrills and chills. It’s a corker – scary and profound. 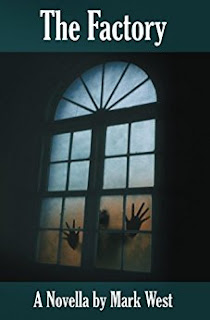 Past the hallway point now, and onto Mark West’s The Factory. This is the longest of the books, right at the top end of the novella word count and tells the story of a group of urban explorers, reunited by the funeral of a former member.
Their friend has died whilst exploring the abandoned factory of the title – described in a lovely, spooky set-piece which acts as a kind of prologue for the book – and, by way of paying respect to him, the group decide to make their own exploration of the premises.
It is a long novella, and many of those words are taken up introducing the characters to us. I felt that maybe this took too much of the book’s running time – there is an excellent scene in a restaurant in which the pasts of all the characters are revealed, and tensions surface which really could have sufficed but before we get there we’ve been through the individual phone-calls to one another and a meeting in a train station. I’m perhaps being overly-critical here, the writing is splendid throughout – Mark has a real ear for dialogue and the characters are all expertly drawn – I just felt the scene-setting took a wee bit too long.
That said, once the group – and the reader alongside them – finally get into the factory, so begins a cracking, thrilling journey through the darkness. Abandoned buildings are creepy – hence their appeal, all shifting shadows, uncovered memories and strange unexplained noises. Mark pulls out all the stops here, and has the added bonus of ghostly children whispering in the group’s ears.
Fate creeps up on the group, biting them firmly in the arse and any problems I had with the first half of the book are well and truly forgotten in the thrills and horror which conclude it. 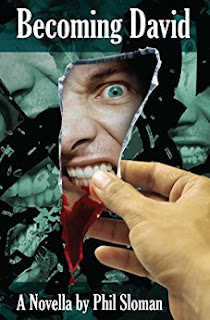 And so, finally, to Becoming David by Phil Sloman. By way of confession, I have to say this is my first encounter with Phil’s writing but – on the basis of this novella – it certainly won’t be my last.
It’s an everyday tale of serial killers and cannibalism – well-worn tropes but given a fresh spin by clever structuring and wonderful prose. The story shifts viewpoints a few times which, as the story unfolds, is shown to be a very clever technique indeed. It’s central character however, is Richard, who picks up men in pubs so as to bring them home to…
Well, what he gets up to is pretty unpleasant but these scenes are described in a matter of fact way, without any real fuss thereby making them all the more effective. There’s gore here of course, but this isn’t the main source of the horror in the novella – the book is much more subtle than that, psychological rather than visceral in its terrors.
It’s a haunting tale – quite literally – and one of possession. The David is the title is one of Richard’s victims, unfortunately he won’t simply lay down and die.
I felt Becoming David was a book of two halves, there’s a distinct change in tone in the second part of the book as Richard goes on the run, a lighter feel with a lot more humour. This wasn’t a problem though, as I enjoyed both sections. The writing, just like Richard’s planning, is precise –and a joy to read. From (restrained) slasher horror to a psychological descent into Hell, I loved every word of it and its conclusion is very satisfying indeed.

Peter mark may has picked a fine set of books to launch his novella line and I highly recommend that you buy every one of them. I wish him well with his new project and look forward to future publications.
Posted by Anthony Watson at 10:52