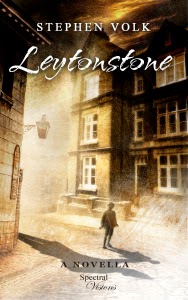 Anyone who’s read Stephen Volk’s collection Dark Corners from Gray Friar Press (and if you haven’t – you should) will have enjoyed a story towards the end of the book called Little H. It’s written as a screenplay and describes the (possibly apocryphal) story of how Alfred Hitchcock’s father made him spend a night in a police cell when he was seven to teach him a life lesson and show him what happens to “naughty boys”. That story has now been expanded into a novella and forms the starting point of Leytonstone, the second in the author’s putative Dark Masters trilogy published by Spectral Press.
The first in the series- the sublime Whitstable (which I reviewed here) – focussed on Peter Cushing, set towards the end of the great actor’s life. One of the many joys of that particular book was the references to many of Cushing’s films woven into the text and the subtle way in which they impacted on his character and the same technique is used in Leytonstone although this time it’s the other way round – it’s the real life events experienced by the young Hitchcock which will influence the films he is yet to make.
The screenplay format of Little H isn’t employed for this longer version but the story is written in present tense, a style I personally love and which brings an immediacy to - and an immersion in - the events which unfold.
The incarceration is deeply traumatic and will lead to a life-long fear and mistrust of the police. It’s here the young Hitchcock encounters the policeman who will come to play an even darker role as the narrative unfolds. Perhaps relishing his role of captor a wee bit too much, he uses Jack the Ripper as a cultural reference to further terrify the boy and it’s a strange sensation to realise that the East London serial killer only ended his reign of terror some fifteen years before the events described here. It’s incredible to think that someone so associated with the “modern” art form that is cinema was born in the nineteenth century, the Victorian age.
As profound as the experience is, it’s Alfred’s behaviour afterwards (or at least Stephen’s version of them) that define the man who is to come. It would have been incredibly easy to shoehorn in a load of overt visual references, hinting at the films to come (Alfred attacked by a flock of crows, Alfred breaks his leg and is confined to a wheelchair…) but it’s a credit to Stephen’s skill as a writer that the seeds are sown in the most subtle way.
Yes, there’s a Hitchcock Blonde (though her hair is described as yellow) but it’s the themes of the films to come rather than direct references that are highlighted here – the voyeurism that was a major feature many of his films, the disdain he reputedly showed towards others, actors particularly. It may be another myth that Hitchcock described actors as cattle but based on the character drawn here it would be an entirely believable comment.
It has to be said that the Alfred Hitchcock on display here is not a sympathetic character. Truth to tell he’s pretty horrible. Context for this is provided by his parents, characters beautifully drawn by the author, his father in particular – a man for whom it seems expressing any kind of emotion is an impossibility. (It’s pertinent that it’s emotional support his mother desperately craves). Yes, the main thrust of the narrative is Alfred but this is definitely an ensemble piece and the book works so well because as much care and attention is given to the other characters and their narratives as to the young Hitchcock.
As befitting the second part of any trilogy, Leytonstone is dark and certainly lacks the optimism and uplift of Whitstable. It is an incredible piece of writing though and one which will be appreciated by those with a less than encyclopaedic knowledge of Hitchcock’s films as much as those who do. It is with much anticipation I await the third of the trilogy, whose subject and title remain to be seen. (My money’s on Bramshott though).


Leytonstone has the makings of another classic. Befittingly (given the overt influence Catholicism had on Hitchcock’s life), Stephen has proven the claims of the Jesuits by taking the boy at seven and giving us the man. It’s a book I highly recommend. You can buy it from the Spectral Press website here.
Posted by Anthony Watson at 10:26