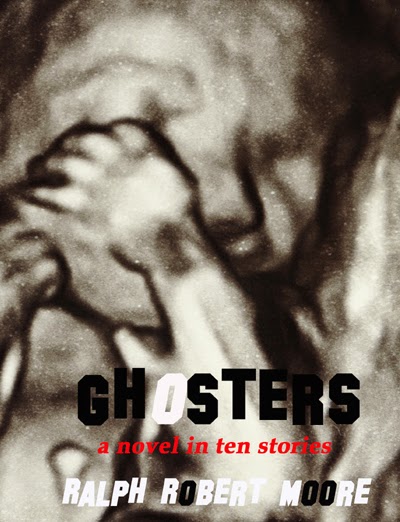 My first encounter with the writing of Ralph Robert Moore was We Don’t Keep in Touch Anymore which appeared in Shadows & Tall Trees. The story introduced the characters of Stan and Bud who collected and traded in ghosts which had been captured in glass bottles. It was a highly imaginative concept which worked wonderfully and – whilst the story was enjoyable enough in its own right, it also hinted at a bigger narrative surrounding it. And indeed, such is the case, as his new book Ghosters proves. It’s described as “a novel in ten stories” although while there are overarching narratives, it is in reality a short story collection.
We Don’t Keep in Touch Anymore is one of the stories in this collection and its protagonists Stan Costello and Bud Hardy (whose names trip off the tongue more easily than Lou Laurel and Oliver Abbott it has to be said…) are the main characters in two further stories which top and tail the collection (and which provide that over-arching narrative). They are the Ghosters of the book’s title and are members of a small group who travel around “curing” people of their hauntings. Other members of the group are introduced in the book, Clay, Tilda, Patrick and his apprentice Matt. All are beautifully drawn characters, all are weird (though in different ways…). Their skills lie in communing – and communicating with – the world of ghosts and not with people. Empathy and diplomacy are not their strong points and their bluntness and insensitivity towards their clients often results in laugh out loud moments. There’s a certain vicarious enjoyment to be had reading some of these exchanges in which the Ghosters come out with things we’d all really, deep down, like to say ourselves.
There’s a lot of humour in the book then but there’s also real horror – the opening and closing stories in particular, set in the upper floors of a haunted mall, contain some truly disturbing imagery – and there’s also poignancy, often when you least expect it.
There are also a lot of Styrofoam cups.
The Ghosters themselves are wonderful creations and the skill the author shows in moulding them is also evident in the characters of the clients. Ralph’s style of writing is concise; short, clipped sentences abound but he still manages to invest all his characters with real personality and depth.
Taking the whole notion that ghosts – and thus the Ghosters – exist, the author can invest his (impressively huge) imagination in creating the world, and the rules which govern it, which surrounds them. Here you’ll find sub-categories of ghosts; Neeks, Smudges, Mouths and Flesh Ghosts as well as others and also a set of rituals for their disposal for which the word bizarre seems a woefully inadequate description. Who’d have thought that oregano, cockroaches and horses could be put to such inventive uses? Utterly bonkers and yet somehow completely plausible.
There are also a lot of Styrofoam cups.


Anyone familiar with Ralph’s stories in Black Static, his previous collections or his incredible zombie novel Dead Like Me will know that he is an extremely imaginative writer, coming up with some truly original ideas. That skill is demonstrated emphatically in Ghosters and I sincerely hope the world he’s created here is one the author will return to in future publications. It’s a book I urge you to buy - which you can do here.
Posted by Anthony Watson at 09:35