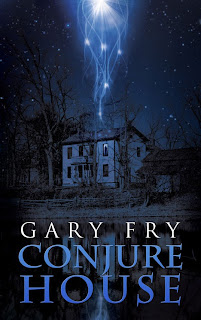 Conjure House is the latest novel from Gary Fry and is published by Dark Fuse Publishing. The striking cover art hints at what lies within, suggesting another venture into Cosmic Horror and indeed that's exactly what the reader will get with a tale of ancient horrors resurfacing in the present day.
There's a lot more to it than that though, a whole lot more. As well as being on one level a thoroughly enjoyable horror story, with some well constructed set pieces, Conjure House is also an exploration of some fairly weighty topics; the nature of perception, the pursuit of omniscience and whether it's science or art, intellect or emotion, the head or the heart that best allows an understanding of the universe we live in, of what we are - of why we are.
Deep stuff indeed and fitting that the small village in which the story unfolds is called Deepvale. (On the subject of names, I have to admit to getting quite excited at reading a novel where the main character shares my christian name (I need to get out more, I know) but some of the gloss wore off when I realised that "Anthony" was probably chosen in order to be shortened to "Ant" - with all the insignificance that variation carries with it). The theme of perception is probably the strongest to run through the book, a new twist on the story of the four blind men describing an elephant giving rise to imagery and symbolism that becomes increasingly significant as the story progresses.
The four main protagonists are nicely drawn characters but in reality they are little more than devices to explore the science v art debate, being a psychologist, a musician, an artist and a writer. This isn't a problem once you accept what their role in developing the narrative is, that narrative being more of a fable rather than an attempt at gritty realism. Gary has a very distinctive voice, easily identifiable. It's cerebral, intellectual - (and any of the other words my thesaurus has listed against "scholarly") - and sometimes I've had problems with that, not because I don't understand some of the longer words - even though that has been known to happen - but rather when it seeps into the voices and thoughts of the characters in the story. This does happen on occasion within Conjure House but the narrative flows along at such a rate that it's a minor quibble. (Another minor quibble, but one that took me out of the story is that Lisa, the writer, a writer of horror screenplays, doesn't recognise the word Cthulhu. I rationalised this away by assuming that within the novel Cosmic Horror was a reality and therefore the fiction of, say, Lovecraft didn't exist (much like characters in soap operas don't watch soap operas) but that's not the case as Paul, the musician, has appropriated the name for his band. As I say though, a minor quibble).
The psychology theory in no way overwhelms or distracts from the narrative though, in fact blends in to it perfectly, enhancing it to produce a quality piece of writing that will stimulate both emotion and intellect. It's a rare skill to be able to combine the two but Gary has it in abundance. I enjoyed Conjure House very much and it definitely gets an opposable thumbs-up from me.
Posted by Anthony Watson at 11:17