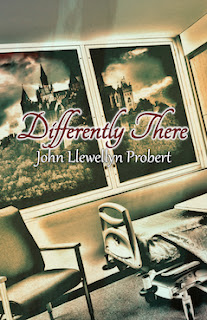 Differently There is a new novella from John Llewellyn Probert and is published by Gray Friar Press. It tells the story of Paul Webster, admitted to hospital on the night prior to his operation to remove a cancerous tumour. The nature and location of the lesion mean that the operation is a risky one, the outcome uncertain and it's this enforced confrontation with his own mortality that provides the context for the story which unfolds.
Anyone familiar with John will know that he has faced a similar situation himself recently and this experience obviously informs the writing which, as expected, is a joy to read. The subject matter means that this is indeed something different from John, a more contemplative, melancholic piece but in so being, proves just how good a writer he is, whatever the style or theme of the story. There is a touch of whimsy at the beginning of the tale, with descriptions of the mundanity of the room in which Paul finds himself and the furniture therein. It's actually a very effective device and it was nice to see it reprised at the story's conclusion.
The novella is written in the present tense which works beautifully and is entirely appropriate given the storyline. As Paul drifts in and out of consciousness, he dreams of past experiences, gradually realising as the night progresses that there is a significance attached to them and also that there is something more to them than merely reminiscence. The memories he has are subtly altered, at first it seems by his love of fantasy and horror somehow merging into them but in reality by something a lot more sinister.
To describe more would be to give away too much but the truth of what is really happening is slowly revealed and leads to a moment of decision that is the most important of Paul's life.
Differently There is an exploration of how the decisions we make, the memories we collect influence our lives and make us who we are. It's about the mistakes we make and how we respond to them. It's about optimism and, dare I say it, the human spirit. It's a love story - or, if I may be so bold - a love letter. John's own love of horror and science fiction shines through and it's significant that special mention is given to Alfred Bester's The Demolished Man.
It's a fabulous piece of writing - I use the word in its most literal sense as well as its more colloquial. There's a moral for sure but it's written with so much style that it's nowhere near preachy. It's ironic that a story whose subject matter is death and mortality is actually such a life-affirming piece of writing. I had goosebumps when I finished reading Differently There - and yes, I had to wipe away a little moisture from my eye. (I think the bloke sitting next to me on the train believed me when I said I had some grit in it). It pretty much goes without saying that I recommend it most highly.
Posted by Anthony Watson at 10:17