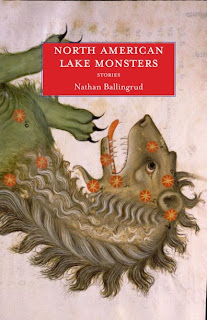 It's always a joy to come across an author whose work you haven't come across before and be blown away by the quality of what you read. Such was the case last year when I read Nathan Ballingrud's novella Wild Acre in the Gary McMahon edited Visions Fading Fast. That story was one of my best reading experiences of that particular year so it was with much anticipation that I began reading his latest collection of stories, North American Lake Monsters which is published by Small Beer Press.
Wild Acre is one of the nine stories making up this collection, all of which are as impressive - if not more so - than that particular tale of a man under pressure undergoing a transformation, a theme that echoes throughout all of these stories. There's redemption to be found here, but not always, but in most of the stories the characters undergo an epiphany of sorts, usually as a result of some kind of interaction with - for want of a better phrase - supernatural forces.
And therein lies one of the strengths of Nathan Ballingrud's writing. The supernatural elements are woven into the narrative effortlessly. They never appear tagged on, their presence in the stories appearing perfectly natural, part of the plot rather than the key device around which everything hangs. There are real monsters in these stories, and yes, the unholy trinity of vampire, werewolf and zombie all appear but in ways that are subtle and understated and which enhance rather than exploit the mythologies built up around them.
The true horror in these stories lie within the protagonists and, in more than one case, the lives they lead. These are broken people in broken relationships and are all expertly drawn characters. The dialogue is perfect, often short and terse but conveying a wealth of character in only a few words. There's an element of sadness and despair in most of the stories and the conclusions are often abrupt and ambiguous. There are those who will complain at this, those who like everything neatly resolved and tied up come the story's end. I'm not one of those people so I loved all of them.
North American Lake Monsters is a stunning collection of stories. Intelligent, literary writing that uses horror in a profound way, examining and exposing the darkness that lies within us all.
Posted by Anthony Watson at 09:39