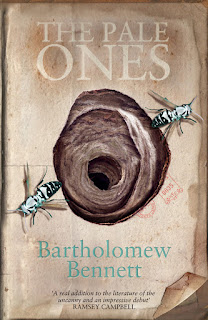 The Pale Ones is a novella by Bartholomew Bennett and is published by Inkandescent. Both author and publisher are new to me but, having now experienced the wonder that is The Pale Ones, I’m glad that connection has been made. Inkandescent’s mission statement, “a commitment to ideas, subjects and voices underrepresented by mainstream publishing” is a noble one and worthy of support. On the basis of this novella, a commitment to quality is also apparent.
The Pale Ones has been described as literary horror, a term about which I have mixed feelings. Whilst I enjoy both genres – yes, I believe “literary” is as much a genre as thriller, Sci-Fi or romance – and there are some sublime examples of the combination of the two, there are also others in which the horror element is noticeably lacking, the author believing that creating a sense of confusion and bewilderment amounts to the same thing. Getting both aspects right is a joy to read and that’s very much the case with this novella.
It’s set in the world of second hand book dealers and begins with our narrator encountering Harris, a fellow-collector, who advises him to purchase a specific book, World War Two Destroyers. A relationship develops between the two, culminating in a joint expedition to the north of England to seek out new (i.e. old) stock. Whilst my punning heart was slightly disappointed that this wasn’t a trip to Hull and back, (they don’t get as far as the port), the unsubtle meaning of that potential bad joke still stands as Harris proves himself to be the companion from Hell.
The first person narrative allows much enjoyment to be had from his cynical reporting of the pair’s adventures. There is, of course, a suggestion of unreliability; much like the protagonist of Lowry’s Under the Volcano, a book referenced more than once in the story, the narrator has some alcohol – and relationship – problems. This potential unreliability adds a frisson of ambiguity to some of the scenes he describes, bizarre behaviour from associates of Harris, Harris’ description of his customers as “children” and, most potently of all, glimpses of strange creatures sculpted – so it would seem – from papier maché…
It was wasps that confirmed to Charles Darwin that God was not responsible for the creation of life and the flying insects subliminally hover around the fringes of this story. (Actually, not that subliminally – they are on the cover of the book). Wasps, who create nests made of chewed up paper; wasps who kill the hosts from which they hatch – not to say their own parents and siblings; wasps who spoil any summer picnic. (Okay, not all of these are relevant to this story).
The Pale Ones is a journey of discovery for the narrator. Yes, it’s a tale of book hunting but what he uncovers amounts to much more than a rare first edition. The realisation that his meeting with Harris was not a chance encounter (the opening line of the novella is really quite important), and that it’s not the books themselves which are so important to him is only the beginning of his discoveries and the narrative slowly builds towards a denouement that will leave you shocked as well as sending a shudder along your spine.
The Pale Ones gets it absolutely right. Beautifully written prose, loads of ideas buzzing around and – most importantly – proper scary. I loved it, and look forward to what both author and publisher come up with in the future.

Email ThisBlogThis!Share to TwitterShare to FacebookShare to Pinterest
Labels: Bartholomew Bennett, Inkandescent, review, The Pale Ones