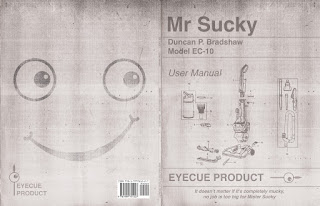 Mr Sucky is the latest offering from Duncan P. Bradshaw and is published through his own imprint EyeCue Productions. With a word count coming in at somewhere between a long novella and a short novel, it’s an everyday tale of serial-killer-becomes-vacuum-cleaner, a trope which has been woefully underused within the genre. Vacuum cleaners had been around for some fifty years by the time Kafka wrote The Metamorphosis but he chickened out, preferring to use a giant insect to express his weird father complex thing.
Those expecting gritty social commentary will be disappointed if they pick up Mr Sucky but those looking for some cleverly crafted bizarro fiction will find much to enjoy here. It’s a mix of extreme horror and comedy (“Gore-Com”) which manages to combine both elements very effectively. I’m generally not a fan of extreme horror but when it’s presented in such a gloriously over-the-top fashion as it is here you can’t fail to be impressed by the imagination that has gone into some of the set-pieces. Before I started Mr Sucky, I wondered how a vacuum cleaner could possibly murder people but now I’ve finished the book, I feel I’ve been educated (and quite possibly know too much about the process).
So the “Gore” half of the equation works well, how about the “Com”? It’s really hard, being funny. Many have tried before and failed but there are some outstanding examples of horror/comedy hybridity out there too. It’s difficult because everyone’s sense of humour is different, one man’s side-splitting hilarity is another man’s melancholy and despair. Personally, I pride myself on my grumpiness but I have to say that Mr Sucky had me laughing out loud on more than one occasion. (Cue awkward conversations with my better half as to what it was that had made me laugh. “Well, there’s this hoover, possessed by the spirit of a serial killer, who’s just sucked someone’s intestines out…”) It takes skill to get the blend right and it’s here in abundance.
The “hero” of Mr Sucky is Clive Beauchamp, a serial killer with a split personality, the two halves of which provide the (mainly) first person narrative of the story. The events of the novel/la take place in the Quantico motel (a reference, I presume, to the FBI building – an organisation whose first director was J Edgar someone). Clive is setting up his latest kill, unaware that it will be him who will be Dyson with death – unsuccessfully as it turns out – himself becoming the victim, initiating a chain of events which, by a series of bizarre and unfortunate turns of fate, results in his spirit being transferred into the titular vacuum cleaner.
Following this, much chaos ensues.
To be honest, Clive’s reanimation as a domestic appliance is one of the less bizarre things to happen as the varied cast of characters make their appearances. It’s all very cleverly done with the humour ranging from broad to subtle, the violence from intense to very intense. What I particularly enjoyed was the structure of the narrative which was fractured, jumping around in time and point of view. Reminiscent of Pulp Fiction with its disrupted and looping timelines; Pulp Suction perhaps.
I had a blast with Mr Sucky, enjoyed the hell out of it. It takes a strange, twisted kind of imagination to produce something as bizarre yet enjoyable as this and, luckily for us all, that’s exactly what Duncan P. Bradshaw has. 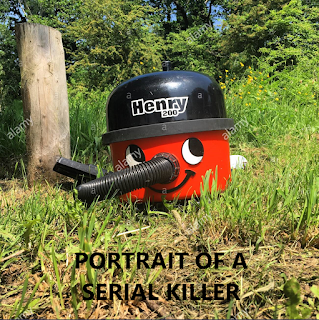