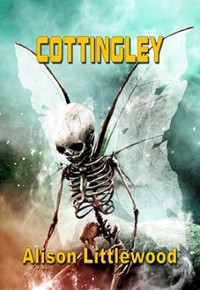 Cottingley is the new novella by Alison Littlewood and is the second in a new series of four being published by NewCon Press. The book uses as its backdrop the events of 1917-1920 in which photographs purporting to be of real fairies were taken by two young girls, Elsie Wright and Frances Griffiths, which gained a deal of notoriety when Sir Arthur Conan Doyle used them in an article for the Strand Magazine, regarding them as genuine and proof of the existence of the creatures.
The novella is set in 1921, when interest in the photographs was beginning to wane and is written in epistolary style, consisting of a series of letters from Lawrence Fairclough, an elderly widower who lives in the village of Cottingley and who, if he is to believed, has uncovered new – physical – evidence of the fairies.
Other than the first letter which is addressed to Conan Doyle himself, the remainder are written to Edward L Gardner, a prominent member of the Theosophical Society and another true believer in the veracity of the photographs. Fairclough has discovered the body of a fairy, and has his own photographs…
The fairies Fairclough describes are far from benign, indeed, physical harm is done to both his daughter Charlotte and granddaughter Harriet by the creatures. These are the fairies of ancient folklore, malevolent and dangerous.
As the novella progresses, the letters document a change in Fairclough as his obsession with the fairies grows. The replies he receives are not shown but the writing here is so skilful that they don’t have to be – the distancing of Gardner from Fairclough is all too apparent from the increasingly frustrated tone of the letters the widower constantly sends.
The use of letters as the narrative voice in Cottingley is an inspired one, providing insights into the character and personality of their author. Fairclough’s initial excitement at his discovery gradually turns to frustration and hubris, his own vanity leading to anger and arrogance. It’s all beautifully done, the changes introduced subtly and carefully. This character study is the real heart of the book, the fairies and the truth or not of their existence merely the canvas upon which the portrait is being painted.
This deterioration of course leads to Fairclough becoming the most unreliable of narrators. There’s much to suggest that his evidence for the fairies is as genuine as the photographs taken by the girls (who finally admitted they were fakes in 1983). Reading the letters through this filter casts a much darker hue on the story, provides a disturbing viewpoint for some of the incidents he records in his correspondence.


I enjoyed Cottingley very much indeed, cleverly constructed and written with exactly the right amount of ambiguity to keep you thinking about it long after you finish it. You can, and should, buy it here.
Posted by Anthony Watson at 09:51