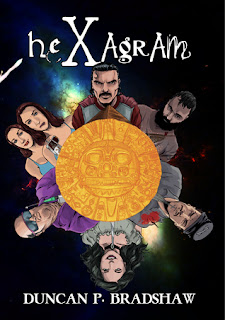 
The story’s a high-concept one and its narrative is cleverly kept going with subtle links between the different sections. I have to say I had a blast with Hexagram, devouring it in a couple of sittings. (Despite its epic themes, it’s not a long novel). Clever, witty and extremely well written, I highly recommend it to your reading pleasure.
Posted by Anthony Watson at 10:45