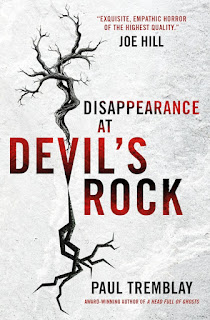 Disappearance at Devil’s Rock is the new novel from Paul Tremblay and is published by Titan Books. Having been thoroughly impressed with Paul’s previous novel A Headful of Ghosts, I was eagerly anticipating this new book, curious as to whether the incredibly high standard set in that tale of (possible) demonic possession would be maintained.
It has. Oh yes. Very much.
This time, the story focuses on the disappearance of Elizabeth Sanderson’s son, Tommy, at the titular landmark. Actually, the huge boulder is actually called Split Rock – because of a fracture running the length of it – its more sinister name arising from a local legend. This duality is one of the many themes running through this skilfully constructed narrative in which nothing is what it appears to be. The rock is appropriately located in a park called Borderland, a name which sums up in a nutshell the whole concept of the book. Featuring a group of young boys as protagonists, this can be read as a coming of age story – the borderland between childhood and adulthood – and within its pages the natural and supernatural worlds abut with each other.
The plot of Disappearance at Devil’s Rock unfolds gradually, with the author slowly revealing its twists and turns. A hefty dose of ambiguity is mixed in, constantly wrong-footing the reader. It’s evidence of great skill and technique (also a feature of A Headful of Ghosts), leading the reader towards an understanding and then pulling the rug from beneath their feet. It’s a technique deserving of its own name. I suggest a “Tremblay”. (Whoa! The author really pulled a Tremblay there!)
The story is told via the recollections of Tommy’s friends Josh and Luis who were with him on the night of his disappearance and also by pages torn from Tommy’s own diary which appear mysteriously in Elizabeth’s house. (Or do they?) Through these testimonies we are introduced to Arnold, an older boy who befriends the trio and who may – or may not be – directly connected to Tommy’s disappearance. The police are involved of course, investigating the incident, and the closing chapters of the book consist of transcripts of their interviews – a brilliant way of doing things as it allows the reader to make up their own mind as to what exactly has happened. Or, at least, attempting to. It’s a case of picking out the least unreliable narrator.
Disappearance at Devil’s Rock truly is a great piece of writing. It’s a journey into the darkness that lies around and within us all, creeping into the reader’s subconscious, primal fears much like the dark figure spotted by the eye-witnesses in the book creeps around the neighbourhood. I anticipate much discussion over the final scenes of the book, and in particular the final line but I loved it, gave a small cheer as I read it. (Not out loud of course…)


I honestly believe we’re entering a golden age of horror/dark/weird fiction and Disappearance at Devil’s Rock is a fine piece of evidence to support that hypothesis. I recommend it highly.
Posted by Anthony Watson at 09:56