Under A Raven's Wing. 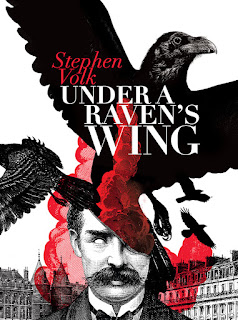 Under A Raven’s Wing is a new collection of stories by Stephen Volk and is published by PS Publishing. The seven stories contained within this beautifully produced book describe the exploits of a young Sherlock Holmes and his tutelage, in the Paris of the 1870s, by another famous fictional detective C. Auguste Dupin. It’s a marvellous concept bringing together the two men - the veteran and the rookie - with the old master passing on his knowledge and wisdom to the young man at the beginning of his career, and something Sir Arthur Conan Doyle would heartily approve of I’m sure, having acknowledged his own debt to Poe’s detective when creating the character of Holmes.

All of the stories bar one are presented as letters from Holmes himself to Inspector Lestrade, written as the master detective nears the end of his own life; a neat inversion from the original stories in which the narrator was Holmes’ partner in crime(busting) Dr Watson. The final story, the incredibly poignant The Mercy of the Night, is the only one not to follow this format – except it sort of does. The bulk of the narrative is a letter from Dupin to Holmes – which finds its way to Lestrade nonetheless, courtesy of Holmes himself who adds his own correspondence as a coda, giving the whole thing the feeling of a story within a story, a dream within a dream.

I confess, the last sentence of that paragraph was a desperate attempt on my behalf to shoehorn a Poe reference in. And pretty awful it was – unlike those that are distributed about the book itself. There’s much joy to be had at spotting them – some are more obvious than others – and they’re an indication of just how much work has gone into producing these stories. The level of detail is astounding, in particular the recreation of the voices of the two fictional detectives both of which ring absolutely true.

With his wonderful Dark Masters Trilogy, Stephen showed himself a master at placing real people in fictional situations to produce compelling stories and insightful character studies. In Under A Raven’s Wing, he’s flipped that around, placing two fictional creations in real historical settings, populated by real people – including Jules Verne – and set against real events such as the dedication of the Statue of Liberty (a scene in which I believe I spotted an uncharacteristic lapse in the accuracy of Holmes’ recollections…) Jack the Ripper flits through one of the stories but there are nods to famous fictional characters too; the Phantom of the Opera and the Hunchback of Notre Dame also get honourable mentions.

There’s great skill employed then in the creation of this fictional/real world but the key to the success of any crime fiction – which is what this is after all – is in the plots themselves, the crimes which have to be solved. Once again, the author has come up trumps; the mysteries here are ones Poe and Conan Doyle would have been proud of creating themselves – seemingly impossible crimes which are solved by the characteristic application of logic and rationality. Whilst Holmes might be the main subject of the book, the nature of the mysteries he and Dupin solve owe more to the latter’s creator, most strikingly in Father of the Man which involves the plot device of a premature burial (and which is my favourite of the collection).

In truth, the book is an origins story, telling as it does of the apprenticeship of Holmes. As such, it does a marvellous job of inhabiting the character and even provides explanations for, and origins of, many of the great detective’s trademarks; the magnifying glass, the violin – even his drug addiction.

I really can’t express how impressed I was with Under A Raven’s Wing. The stories in here are some of the best to feature the character of Sherlock Holmes that I’ve read – and bear favourable comparison to the originals. It’s proof yet again that Stephen Volk is one of the most creative writers currently plying their trade and also one of the most skilled at his craft. It’s a book I recommend highly.