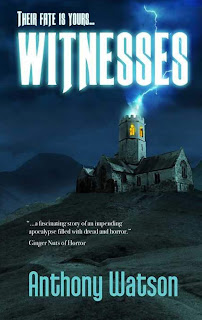 Today sees the release – I should say re-release – of my novel Witnesses. It was first published in February by Crowded Quarantine Publications but unfortunately turned out to be their last book before closing down. The rights reverted back to me and, rather that begin the lengthy process of touting the book around again I decided to put all the experience I’d gained through Dark Minds Press to re-edit and re-format Witnesses myself.
Having worked with Neil Williams on many of the Dark Minds covers, he was an obvious choice for the new cover and, yet again, he’s provided an amazing work of art to grace the novel. In a twilight zone-esque moment, I recognised the mountains which provide the backdrop to the cover as my favourite walk of all time, the head of the Newlands Valley in the Lake District – a fact not known to Neil when he was creating the cover. I’m fortunate, I guess, that my book has had two outstanding covers.
This new edition contains a new foreword and the notes at the end about how the book was written have been extended but the text remains otherwise the same (apart from one typo which somehow got through the editing process first time round which is now fixed). Whilst this can be considered as Witnesses: Redux, I resisted the urge to include an extended section set in a French plantation as I felt it would slow the momentum. Whilst the words remain the same, I’ve played around a little with the layout and decided to use different fonts for the different timelines and characters within the novel to “enhance” the reading experience. (This is only available in the paperback – those reading the kindle version will have to suffer the confusion and bewilderment that readers of the original version had to endure). (Which was deliberate BTW).
I’m very proud of Witnesses, it’s a book I put a lot of work into. Initial reaction was very positive and I hope that continues now that the book is once more available. You can buy the book here.