In Dog We Trust 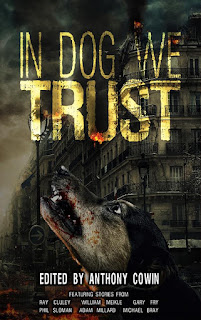 In Dog We Trust is an anthology of horror stories featuring the titular beasts which is published by Black Shuck Books and edited by Anthony Cowin. It’s an interesting choice of theme for an anthology and one with a somewhat checkered pedigree. I have rose-tinted memories of both Hammer’s The Hound of the Baskervilles and Crown International Pictures’ Zoltan, Hound of Dracula but less fond memories of The Pack, a film I saw in my teens as part of a double bill with the Food of the Gods (although it was the supporting film of that combo and I may well have been so terrified by the sight of Ida Lupino’s giant chickens in the main feature that it affected my appreciation).
James Herbert gave us Fluke which is actually very good, not least because it was a departure from his usual fare and as such, not really horror at all. The crowning moment of canine horror has to be Cujo though, a book I’ve only just re-read recently and which is, despite the author being unable to remember writing due to various chemical diversions, one of his best. The film is pretty decent too.
There are a variety of approaches to the theme on display here, with some of the authors presenting their stories from the perspective of the dogs themselves. This is the case with Lily Childs’ Queen Bitch and Willie Meikle’s Leader of the Pack.  Having two dogs myself, the latter did make me smile with its knowing insights into canine psychology and it has a killer last line. It also encompasses another theme running through the anthology, that of a disaster befalling humankind which results in dogs becoming the dominant species.
Adam Millard’s take on that apocalypse is the phenomenon of Hikikomori, or shut-in syndrome in which humans withdraw from society, hiding in their own homes. At first, dogs are used to help out, running errands for their reclusive owners but gradually the relationship changes, the dogs filling the space left behind by their erstwhile masters…
A canine apocalypse is hinted at in Mark West’s Chihuahua, with a group of strangers encountering the beginning of the end at a petrol station (a set-up which reminded me of a scene in Hitchcock’s The Birds, another animal-apocalypse scenario). It is, I have to say, an odd little story – not because of the subject matter but because of the way it ends. I’m all for leaving stuff to a reader’s imagination but this seemed a little, well, abrupt.
The scientific manipulation of our canine friends provides the basis for a couple of stories. Mulligan Street by DT Griffith introduces us to the Coywolves, genetically modified hybrids which possibly deserve a longer run than this story gives them, only hinting as it does at their nature. There’s a lot of high concept stuff going on in Steven Chapman’s Good Girl but there’s maybe a wee bit of shark-jumping going on with the limits of credibility stretching almost to breaking point. It’s a curse of the short story format that big ideas are compressed and I feel that this story in particular suffers from that with no real explanation of the science and technology which play such a big part in it.
One of my favourite stories in the anthology is Amelia Mangan’s I love You Mary-Grace, a wonderfully atmospheric tale with a strong feel of Southern Gothic which provides a fresh spin on the werewolf legend. It’s a story which creates and introduces its own new mythology; that of the dog-headed people, a beautifully constructed slow-burner of a tale told in a distinctive and authentic first-person voice.
Despite being man’s best friend™, dogs unfortunately often bear the brunt of some of the more sickening manifestations of human nature. Revenge is the motivating force in Michael Bray’s Burger Van, the titular vehicle a source of “special” meat whose provenance incurs the wrath of a marauding pack of dogs whilst the final story in the collection, Phil Sloman’s A Dog is For Death, delves into the murky world of dog-fighting to create a highly effective tale of revenge from beyond the grave.
The nature of the beast is under scrutiny in Gary Fry’s Man’s Best Friend, a suitably ironic title for this examination of relationships, abusive and otherwise and it’s this same comparison between animalistic tendencies which provide the basis for the outstanding story of the collection – in my opinion – Painted Wolves by Ray Cluley.
There are few better than Ray at crafting a story around a central theme, constructing a framework on which to hang ideas and motifs to create a reading experience that is as enjoyable as much for the way it has been written as the narrative it contains. Such is the case here, with its tale of a wildlife documentary crew filming African Hunting Dogs. There’s nature red in tooth and claw here, with savagery in a hostile environment all told in an ingenious first person narrative. The author masterfully manages the growing sense of unease throughout the story, building the tension towards a denouement which – whilst not unexpected given all that has preceded it – is truly horrific.
Painted Wolves opens the collection and provides a powerful introduction to what is a very strong anthology. Whilst some of the ideas don’t quite hit the mark, the writing throughout is of a uniformly high standard and there’s much here to enjoy. It’s probably fair to say that the wrong species ended up with the opposable thumbs, far better they had gone to a branch of the animal kingdom with more intelligence but within the pages of this book at least, every dog does indeed have its day. Anthony Cowin has done a great job here, producing an anthology of great quality.


In Dog We Trust will be launched at Edge-Lit on 14th July. 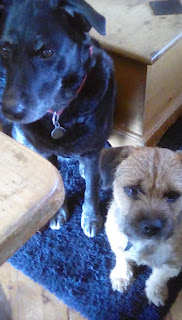