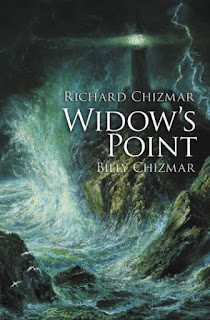 The epistolary novel has a long and well-established history, dating back to the 18th Century and has provided the modus operandi for a number of horror novels – most famously Bram Stoker’s Dracula. The “found footage” technique of film-making has become almost a cliché these days but again, is well established (and had been around a long time before The Blair Witch Project hit the screens).
Whilst some books have had plots which revolve around the discovery of found footage, thus combining the literary and cinematic, Widow’s Point – the new novella from Richard and Billy Chizmar which is published by Cemetery Dance - takes this process one step further by presenting the book as a series of transcripts of video and audio recordings without an accompanying narrative to surround them.
The recordings have been made by writer Thomas Livingstone (always a good name for an explorer) during his investigation of the lighthouse in Nova Scotia which shares its name with the novella and are presented in sequential order, with each extract given a date and time.
After having been locked into the lighthouse by its custodian in order to begin his investigation, Livingstone’s video camera is damaged – meaning the majority of the book is made up of transcripts of the audio recordings. Which is a masterstroke.
Although there is much passion and emotion from Livingstone on display here, it’s the dispassionate way these extracts are presented, as a formal document, that gives them such massive impact. By presenting the information in what is actually a limited way – no flowery prose or vivid descriptions here – the readers themselves are made to paint their own picture of what is happening around, and to, Livingstone.
There’s extremely effective use of “noises off”, including some literal bumps in the night and a variety of voices other than Livingstone’s which subtly – and sometimes not so subtly – build up a feeling of dread. Many of these are commented on by Livingstone himself but most effective are those where he is absent from the recording, ignorant of the sounds described to the reader and which deliver a delectable frisson of terror.
There’s no denying that a whole boatload of clichés are in play here; man alone in locked, haunted lighthouse - but the way in which the story is presented reinvigorates these old tropes, painting them in fresh colours and, in the process, creating a genuinely chilling read. It’s a technique that could have gone horribly wrong but the authors have shown great skill in crafting this novella and it was a joy to read a horror story that was actually scary.
If I have any criticism, it’s that there’s a section at the end of the book which I felt was unnecessary. The transcripts are followed by an official police report which works exceedingly well. It’s after this, however, that another section is added which I felt the book would have been better off without.
This aside, I very much enjoyed Widow’s Point and recommend it highly to your reading pleasure.