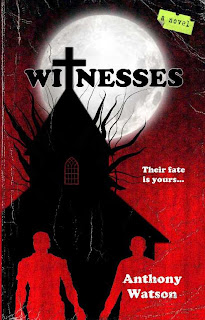 It’s with a great degree of pleasure that I can announce that my novel, Witnesses, is now available for pre-order from Crowded Quarantine Publications, with a publication date of 31st January next year.
It was accepted after an open submissions period in 2016 and since the announcement was made I’ve been anticipating the actual release with – it has to be said – a fair degree of excitement.
Adam Millard has done a great job on the edits, translating my meandering prose into proper English and has produced an absolutely stunning cover. He’s taken my suggestion of “err… maybe something with a church on it” and produced an amazing piece of art. I love the 70s pulp paperback feel of it, the creases on the cover a lovely, and clever touch. I was blown away when I saw it for the first time and my love grows for it every time I look at it. (Which is probably more than would be deemed “normal”).
It’s beautifully produced and rendered but also encapsulates the themes of the book, with the two figures, the church and yes – the tentacles…
Witnesses takes as its inspiration the Book of Revelations and the prophesies concerning Armageddon contained within. Given that this is my debut (published) novel, I thought I’d make life really hard for myself by setting it in four different time periods in four different locations around the world: World War One Belgium; Virginia in the United States in 1946; Malaysia in 1977 and the North East of England in the present day. (One of these required less extensive research than the others).
Perhaps it would have been easier to write the four sections one at a time and then cut and paste but, for my sins, I chose not to do it this way. The way the narrative jumps back and forth between the different time periods/locations is exactly as I wrote it – a process which stopped me getting too bogged down in one particular narrative thread and which hopefully keeps the momentum of the book going, dropping clues and revelations so that the reader will slowly work out what’s going on along with the book’s protagonists.
That’s the plan anyway…


I really enjoyed writing Witnesses and am proud of what I’ve produced – even prouder after having seen the amazing job Adam has done. It will also be available as an e-book but you can pre-order the paperback here.

And here's the blurb:

The End Times are upon us…
In the small village of East Lee in north-east England, Dave Charlton is studying for his PhD, an academic work that will probably be read by only a handful of people. His research is of limited interest – certainly nothing that will change the world.
The world is changing though, and as his perception of reality mysteriously begins to alter - bringing new abilities to see what others cannot, a stranger arrives with revelations which will transform the course of his life for ever – and the lives of everyone else on the planet.
Dave finds himself a key player in a story as old as time itself, forced into a situation where the decisions he makes really are the most important in the world. He has become part of the endless cycle of conflict between the forces of good and evil, the struggle which will culminate in the final battle: Armageddon.
Moving between the present day, the battlefields of World War One Belgium, 1940s Virginia and Malaysia in the 1970s, WITNESSES is an epic tale of destiny and apocalyptic horror.
Posted by Anthony Watson at 10:16