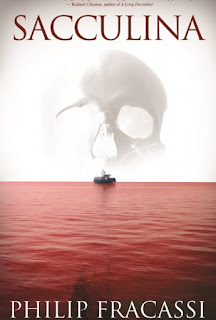 I have to admit to being a sucker for a good old creature feature. There’s nothing quite like a story of man against monster, whether those monsters are of the supernatural or natural kind. Shark movies seem to be making a bit of a resurgence lately but none will ever top the magnificence which is Jaws. Perhaps it’s the combination of the isolation of being out on the open sea and the threat of the creature itself which makes maritime monsters especially terrifying. Cast adrift on open water, it’s feasible that any creature can be made scary – certainly the case with sharks, giant squid and killer whales. Even as benign a creature as a whale can be rendered terrifying – especially if it’s white.
Such is the setting for the new novella from Philip Fracassi, Sacculina which is published by Journalstone. The monsters faced here are a mutated species, a surprising choice on the face of it perhaps but, as it turns out, an inspired one, the scenes at the book’s conclusion deftly handled by a writer with abundant skill and technique, creating real tension amidst the more visceral elements.
Brothers Jim and Jack charter a boat to go on a fishing trip with friend Chris and their father Henry, a chance to re-forge old ties and bond following the release of Jack from prison. There’s a little bit of foreshadowing before the boat even leaves port with the captain trying to warn them off because of bad weather, only to accede to their wishes but taking them to a different, safer(!), location…
It’s all lovely, traditional stuff and it’s the familiarity of the set-up which creates a warm glow of recognition in the reader, a sense of anticipation at what is still to come once our heroes are out in the middle of nowhere.
Given the environment the men find themselves in, the opportunities are there for much discourse and recollection with back stories floating to the surface, revealing much about the characters, revealing hidden depths. Tensions – familial and otherwise – are exposed, nicely adding to that of the overall narrative; the journey out to sea mirrored by that into the souls of the protagonists themselves. These sections are nicely done, allowing insight without slowing the pace or being a distraction. There’s even space for a little profundity, musings on life and the nature of existence – again without holding up the narrative which slowly ramps up the tension and feelings of dread until the real horror arrives.
And it is real horror. The attack of the creatures is handled with as much skill as the character development which has preceded it. Trust me, this is intense stuff with some sequences definitely not for the faint-hearted. The pacing here is superb, exciting and frantic, a lovely counterpoint to the slow build of tension which has gone before.
I loved Sacculina; pulpy enough so as not to betray its creature-feature origins but elevated by very skilful writing so that while you still may not care for some of the characters, at least you’re interested in them. Having already released a collection which is a contender for year’s best, Philip has here provided a novella with an equally strong claim to that title.


Sacculina is released on May 12th and you can buy it here.
Posted by Anthony Watson at 10:11