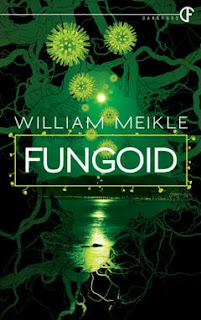 Fungoid is the new novel from William Meikle and is published by DarkFuse. It’s an apocalyptic tale from an author who, over the course of his writing career, has wiped out huge swathes of the world’s population by means of alien invasion, cosmic seaweed and giant crabs (to name but a few) this time choosing to bring about the end of the world with a fungal infestation.
It’s an original take on the apocalypse and, it has to be said, an entirely plausible one. Just Google “largest organism on earth” if you need proof. The fact that any organic material can provide a home for the organism means that the world itself is infected – not just the people living on it and, throw in the fact that the fungal spores are dispersed by wind and rain and you have a truly terrifying scenario.
By concentrating on a handful of characters, Willie manages to corral what could have been a sprawling epic of book into a tightly constructed, fast-paced narrative – a cracking read that homages the pulp novels and B-Movies which must surely be its inspiration. Whilst greatly enhancing the pace of the book, this approach can have some drawbacks – most notably when world events are touched upon, outbreaks of wars and civil unrest relegated to a few lines or a paragraph almost making them seem like an afterthought. There are some scenes of environments overgrown with fungal hyphae which were very effective but again, a few more of these set-pieces may have enhanced the book.
It could be argued that this is the quintessential William Meikle book, combining as it does so many of the tropes and themes which have been a feature of his writing thus far. The fungal threat will be familiar to those who read his highly entertaining Professor Challenger collection The Kew Growths – which allows for a little in-joke within the narrative – but another recurring theme, the power of music also crops up here, most overtly in a reference to being “lost to the dance”, a literary motif used to great effect in the author’s collection Dark Melodies.
There’s science too – some real, to add verisimilitude and some made up, to add entertainment value. This is no ordinary fungus, it’s an escapee from a lab – situated in the same country that made Trump’s “Make America Great Again” caps (i.e. not America).
I regard Fungoid as the literary equivalent of North by Northwest – a screenplay that was written for Hitchcock which contained as many Hitchcockian themes and set-pieces as it was possible to cram into one film. The director was in effect making a homage to his own work and there’s maybe something of the same going on here. Whatever, the end result is a deeply entertaining piece of writing which takes a number of well-established tropes and characters and moulds (yes – that was deliberate) them into something new.
From its small beginnings in a traffic accident on Watson Drive (there was always going to be trouble on a street with that name…) to its stirring conclusion on the Newfoundland coast I loved every moment I spent in the world of Fungoid. The end of the world is probably on a lot more people’s minds right now so it was nice to enjoy a fictional interpretation of that scenario.


You can, and should, buy Fungoid here.
Posted by Anthony Watson at 10:36