The Feast of All Souls. 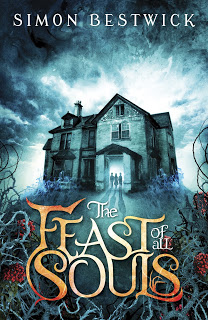 The Feast of All Souls is the new novel from Simon Bestwick and is published by Solaris Books. The titular feast is, of course, Hallowe’en so it makes absolute sense to release the book in December. Actually, it does given the central theme of the novel is the non-uniformity of space-time. Oh yes, there’s a great deal of quantum mechanics and physics to be getting on with here. Luckily, there are also malevolent ghost children, ogres and mysterious red-cloaked figures…
The story begins with the return of Alice to her home town, attempting to pull her life back together after the death of her daughter and the break-up of her marriage. Her new home, 378 Collarmill Road, has a history though with a former resident Arodias Thorne, a Victorian mill owner a prominent part of it. When ghostly apparitions begin to appear – most notably the malevolent children seemingly hell-bent on attacking Alice – that history begins to reveal itself.
This process is enabled by a switch in the narrative between the events of the present day and the “confession” of Mary Carson, employee – and ultimately lover of – Arodias Thorne. It’s all nicely atmospheric stuff which I enjoyed, but all the while I was concerned that the book would turn out to be a variation of James Herbert’s The Secret of Crickley Hall – not that that would be too bad a thing but certainly not what I would have expected from Simon.
Those fears, of course, proved to be foundless as the novel incorporates this well-worn trope into a much bigger narrative, one which turns out to be an extremely potent blend of science fiction, horror and thriller.
378 Collarmill Road is a special place, a portal to other realities and dimensions and it’s the journey through these shifting realities which forms the intricate and twisting plot of the Feast of All Souls. There is, it has to be said, a lot going on in this book, a mixture of themes and genres and in the hands of a lesser writer it could have turned out to be a car crash. This isn’t the case here though, Simon keeps full control over all the themes and ideas, merging them perfectly into a gripping – and horrific – whole.
Towards the conclusion of the book, there’s a break from the action to present Alice’s back-story and I have to say this was my favourite part of the book. The writing here is incredible, presenting a tragic and horrifying scenario in a deeply moving way. It’s placement in the narrative is perfect, a moment of quiet and contemplation before the conclusion.
The plot requires a fair bit of exposition from the characters but this is handled about as well as it can be, never an easy task but the theories expounded are certainly interesting ones, creating  logical – if highly imaginative – explanation for the supernatural goings-on.


I really enjoyed The Feast of All Souls, loved the imagination on display. Scary, thrilling but in places also incredibly moving.
Posted by Anthony Watson at 10:20

Email ThisBlogThis!Share to TwitterShare to FacebookShare to Pinterest
Labels: review, Simon Bestwick, Solaris Books, The Feast of All Souls