Trying To Be So Quiet. 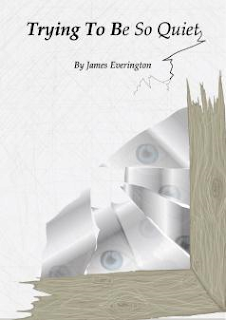 Trying To Be So Quiet is the new novelette from James Everington and is published by Boo Books. I’ve been a fan of James’ subtle, understated writing since reading his collection Falling Over back in 2013. When I reviewed it at the time, I called it intelligent and thought-provoking, an analysis I stand by and characteristics which have been on display in all of his writing since. No more so, I’m pleased to say, than in this new offering.


The story is told in third person with an unnamed protagonist, a highly effective technique which serves to distance the reader from him – effective in that this is entirely in keeping with the character James has created here, a man who is attempting to do the same with people around him following the death of his wife Lizzie. This is not simply a case of wanting privacy, and time to grieve alone however, more a case of being unable to grieve – such an intense emotional response is beyond the protagonist, much easier for him to compartmentalise, to hide his emotions behind walls, his – as the text describes them – “precious barriers and screens”.


The narrative jumps around from present to past, filling in the back story of the romance. There’s much skilful character building to be enjoyed here – some subtle foreshadowing too, with a passing nod to Eliot’s The Wasteland – painting the protagonist as pragmatic rather than emotional, realist rather than romantic. He takes photographs that lack style and finds it difficult to comprehend why the architects of the grand buildings in Oxford would design such massive buildings knowing that they would be long dead before they were completed. He studies accountancy, Lizzie anthropology – the “study of everything.”


Little wonder then, that Lizzie’s death has such profound implications. How can a man who works so hard to hide his emotions accept – and even embrace – one of the most powerful of all?


Not easily. Work, and his work colleagues become even more of an irritation and his nihilistic world view intensifies. Then the blackouts begin, and this is where the supernatural elements of the story begin to ramp up. Glimpses of a figure in a mirror, shadowy at first but then coalescing into an all too familiar face and cracks appearing in plasterwork, the latter (along with the fractured nature of the narrative itself) a potent metaphor for the apparent breakdown of the protagonist. Special mention has to be given here to Helen-Marie Kelly whose Heavy Duty Illustration have provided a distinctive look to the interior of the book with an ever expanding crack moving its way down the page as the book progresses, enhancing the reading experience beautifully.


Events finally lead to a return to Oxford, where he and Lizzie first met as students. Here it is that the story finds resolution. And a very fine resolution it is too, skilfully and satisfyingly tying up all the ideas and narrative threads – what is actually breaking down may not be the character himself, but the walls he has built around himself. Trying To Be So Quiet is a book about death and grief for sure, but it’s also a book about life and love and the significance of moments, however fleeting. It’s about what may come after but, more importantly, it’s about the here and now.


I literally had goosebumps when I finished reading Trying To Be So Quiet. I strongly recommend that you see whether it will have the same effect on you.
Posted by Anthony Watson at 10:52

Email ThisBlogThis!Share to TwitterShare to FacebookShare to Pinterest
Labels: Boo Books, James Everington, review, Trying To Be So Quiet