I was honoured to be asked to review Simon Bestwick's new novel, Hell's Ditch (you can read the review below this post) and equally as honoured to be asked to participate in his blog tour promoting the book.
So here is the latest instalment, a thoughtful essay on a different kind of fall-out, and a salutary reminder that the consequences of military intervention last far beyond the end of hostilities... 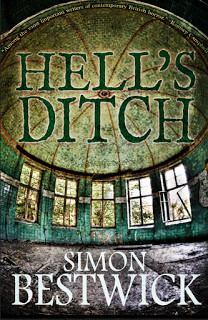 When I was working on my new novel Hell’s Ditch, set in the aftermath of a nuclear attack, I watched Peter Watkins’ ‘after the bomb’ film The War Game. It touched on an aspect of post-apocalyptic fiction that often gets overlooked: the psychological.


Along with the physical casualties of nuclear attack in the film – victims of blast, heat-flash or firestorm, and those suffering lingering deaths from body burns, radiation poisoning, malnutrition and previously treatable disease, Watkins also depicts thousands of survivors suffering ‘complex states of shock’ following their experiences – PTSD, as we’d call it now.


For most of them, of course, the help they’d need would be sparse to non-existent. Similar figures – ‘Spacers’ – appear in Robert Swindells’ 1985 novel Brother In The Land. The country will be filled with the emotionally damaged and shattered, while the children growing up in the aftermath are potentially feral or psychopathic.


There are those who deride PTSD as a wholly modern phenomenon, the product of namby-pamby liberal minds: “Trauma?” one former WWII soldier once said to me? “We didn’t have any of that – we just came home and got on with things.” But coming home and getting on with things doesn’t mean those problems don’t exist; they may be better hidden, may resolve themselves differently, but they’re still there.


Throw that into the mix, and then you also have to take into account a whole new way of life, one that’s a desperate, non-stop struggle for survival. There aren’t any supermarkets any more: food is in short supply. If you want to eat, you grow it, forage it, catch and kill it, or you receive it as a reward for work. Those are the grim realities of a society whose infrastructure has been shattered.


Everyone is, in one way or another, mad; the lucky ones have simply found a brand of neurosis or psychosis that can make a world like this bearable.


In a country like America or Australia, with huge expanses of comparatively unspoilt wilderness, it would be possible to escape the war and its after-effects – not just the ruins, wreckage and corpses, but the awareness that they exist – and start over. Before you can even begin healing from a trauma, getting yourself out of that situation is essential. But in a small country like Britain, where could you go? Nowhere would be untouched: wherever you fled, the ruins would be there. Existing wildernesses would be contaminated; new wildernesses formed out of the rubble and ashes. Wherever you looked would be the ruins of homes like the ones you’d lived in, or dreamed of living in, of shops from which you’d once bought the means of survival or acquired consumer goods you didn’t need with money you didn’t have.


Everywhere you looked, you’d be reminded of the people and the way of life you’d lost. You’d be in a state of permanent trauma, and permanently surrounded by triggers. Small wonder, then, that in the world of Hell’s Ditch people see ghosts: in fact, almost everyone does. They take it for granted; they live with it, and call it ‘ghostlighting’. Wherever you look, it brings the past alive; memories awake, and come to prey on you.


Even with the best will in the world, many who’ve managed to survive horrendous experiences – the refugees fleeing Syria now, or survivors of the recent massacre in Paris – will have memories that will haunt them for the rest of their lives. Hell’s Ditch takes that to its logical conclusion: everyone in this world is fighting a war without end.