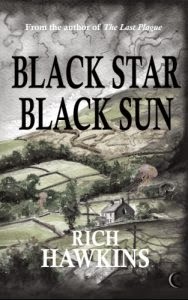 Black Star, Black Sun is a new novella from Rich Hawkins and is published by April Moon Books. It's my first encounter with the author (although I do have The Last Plague lurking on the kindle, waiting to be opened) but, if all his other work is as good as this, then it certainly won't be the last. I really enjoyed Black Star, Black Sun and was impressed by the writing as well as the plot and structure.
The story concerns the return of Ben Ottway to his childhood home of Marchwood. Ben is a broken man, still recovering from the disappearance of his wife, that trauma manifesting itself as a desire to self-harm. The visit home should help in his recovery, a chance to reconnect with happier times, with his elderly father - himself a widower - who still lives in the village.
Perhaps if the novella had been called Shiny Star, Bright Sun this would all go to plan and Ben would find both himself and some closure, undergo a profoundly moving reunion with his father and look forward to a new life. But it's not.
Soon the nightmares begin - of a desolate world filled with terrifying creatures - and it's not long before the lines are blurring between dreams and reality. Rich does a great job here, slowly increasing the sense of paranoia, gradually introducing the weirdness, building to a climax that's earth-shatteringly effective.
It's all very Lovecraftian of course, the horror is definitely cosmic but the author uses these well worn tropes and ideas in a way that breathes new life into them. He strikes the perfect balance between familiarity with the themes and bringing something original to the story. I did smile at the line "the stars were wrong."
The small town location works very well indeed - why shouldn't the end of the world begin somewhere insignificant? - with the characters Ben encounters, and their interactions, drawn perfectly. It's the descriptions of the mundane (the Roy Orbison CDs in the local store, the paperbacks with lurid covers by authors no one has ever heard of) that ground the story in reality and which makes the other-worldly horrors seem even more effective. The imagery Rich employs in the nightmare sequences is wonderfully unsettling.
The small community setting perhaps stretches credulity a wee bit too much with the character of Doyle - who has experienced a previous encroachment by the Black Sun - happening to live in Marchwood too but this is a minor criticism. Exposition's always a tricky one to pull off and it's handled skilfully enough by the author that it doesn't come across as clunky.
The ending is epic and perfectly suits all that has gone before. It's again testament to the author's skill that Ben's backstory is used here but not in the clichéd way that might have been expected.
Black Star, Black Sun is a great little novella. Atmospheric and unsettling, it packs a great deal into its relatively short word count. I recommend it highly. You can buy it here.