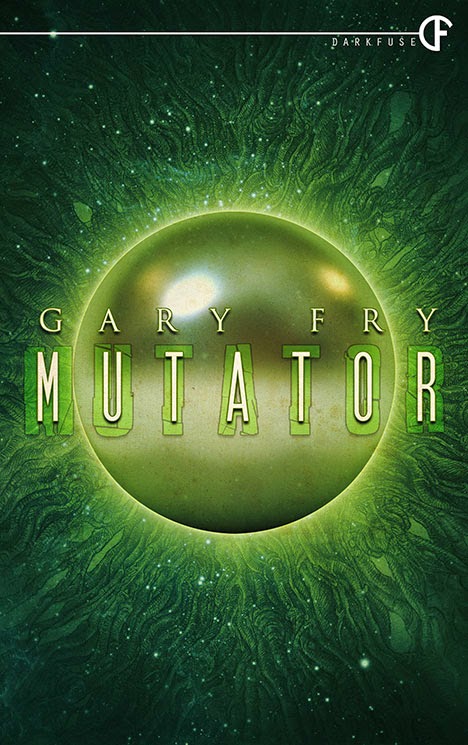 Mutator is the latest offering from Gary Fry and is released by DarkFuse. As expected, it's another slice of philosophical conjecture lurking within the framework of a horror story - another Frydian thesis. Previous books by Gary have focused on the dichotomy between mind and body but there's a different subject matter on display in Mutator with musings on evolutionary theory providing the backdrop to the narrative thrust.
The story centres around James who has just moved into his remote Yorkshire home with his dog, Damian. Yes, a dog called Damian. Unfortunately, it's Damian with an "a" and not Damien with an "e" thereby precluding any jokes about omens but there's plenty foreshadowing going on here - something Gary does extremely well - with encounters with spiders and distorted reflections worming their way into the reader's subconscious, subtly building a contextual framework. It's too overt to be truly subliminal but the effect is the same.
An encounter with a neighbour raises concerns over the house's previous occupant and the discovery of a hidden room containing scientific equipment and journals deepens those concerns. Things really come to a head with arrival of a small, silver ball which falls from the sky and which turns out to be spaceship containing...
Suffice to say, what it is that emerges from the ball provides the horror of the story but is also the basis of its philosophical concerns. As a cognitive scientist, James understands that it is consciousness alone which can adapt immediately to its environment via perception and learning, that the physical body is incapable of such rapid change. Until, that is, he discovers the craft's occupant.
My main criticism of Gary's previous book, Savage, was that it was too short to adequately develop the themes contained within it and I have to make the same comment about Mutator. He's created a truly original monster here with massive potential but I feel the short length of the novella means it's not fully exploited and that the plot contrivances are, as in Savage, exacerbated. I think there's massive potential for this creature and would love to see the ideas on display in Mutator evolve (ha!) into a longer form.
Don't get me wrong though, Mutator is a great read. Despite the emphasis I've given to the theoretical aspects in this review, they in no way overwhelm the story and there's plenty plot to be getting on with and enough gore and gloopiness to satisfy hardened fans of "wet work". The trend of horrible things happening to small mammals established in Savage is maintained here.
Mutator is another trademark blend of horror and philosophy - archetypal Fry - and further evidence of an author making his mark (or should that be Lamarck) in the world of weird fiction. I recommend it highly.
Posted by Anthony Watson at 10:12