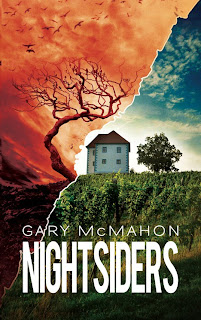 Gary McMahon's latest novella Nightsiders is published by Dark Fuse Publishing and is available in hardback and electronic formats. In reality, unless you're a member of the their book club, you're unlikely to get your hands on a copy of the hardback and, given that there's a waiting list to join the book club, chances are you'll end up downloading the electronic version.
Download it you should though, as this is an incredibly powerful piece of writing, one that transcends its genre sensibilities and which works on many levels, a feast for the imagination and the intellect.
The story begins with Robert Mitchell and his family returning from holiday to take up residence in their newly acquired house in the village of Battle. Their discovery of another family, the Corbeaus already in residence at the house and claiming the property as theirs sets off a series of nightmare events that ultimately question the notions of reality and identity.
What begins as a standard horror trope along the lines of Straw Dogs or Funny Games (influences acknowledged by the author) transforms, as the story progresses into something even darker - and certainly more profound. The sense of paranoia and disorientation is expertly developed and the story's protagonist is a brilliantly realised character, deeply flawed, a man trying desperately to protect his family, driven by guilt over an attack on his wife in their previous life in London, desperate to reassert his masculinity. His confrontation of his own personal demons provides both the narrative, and intellectual thrust of the novella.
The book raises more questions than it answers but therein lies the joy of it. What is real and what isn't? What is reality anyway? Who - or even what - are we? Does the darkness dwell within us or alongside us?
Why is the local policeman called McMahon?
Nightsiders is a stunning piece of work and I'm glad I overcame my natural resistance to e-books to sample its wonders. (What is a "real" book anyway..?) A cracking horror yarn but also a thought-provoking piece of metafiction. Can't recommend it highly enough.