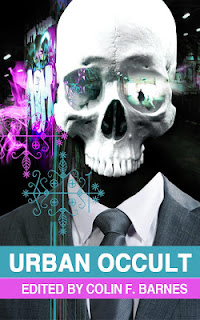 Urban Occult is a collection of fifteen short stories edited by Colin F Barnes and published by Anachron Press. It opens with a powerhouse of a story by Gary McMahon (it would be unthinkable not to include a story of his in a book of urban horrors...) with the ironic title of Just Another Job. It's a disturbing tale with a very dark theme (which in less skilled hands could have been exploitative) centering around a couple of hit-men discovering very dark secrets in the remote house belonging to the paedophile they've been sent to kill. It's the literary equivalent of a kick in the face and a grim (and yes, bleak...) start to the collection.

By contrast, the next story Spider Daughter Spider reads almost like a fairy tale. It's a grim fairy tale though, an estranged father creating a golem-esque replacement for the daughter he is prevented from seeing. It's stylishly written and I enjoyed it very much.
Gary Fry's On The Horizon seems a strange inclusion for this collection given that it's not particularly urban or occult related. It's written in Gary's trademark style, very formal and precise, he is a writer with a very distinctive "voice". I love Gary's stories but I sometimes have a problem when this voice finds its way into the dialogue he writes, making it seem stuffy and stilted. I'm afraid this is what happens here, made worse by the fact that it's young kids who are doing the speaking. It's an interesting coming-of -age story with its fair share of phallic references and metaphors but I'm not sure it's the right story for this collection.
The urban occult theme is pretty well re-established and maintained by the remainder of the stories though. A lighter approach is taken with a couple of the stories, The Strange Case of Mrs West & the Dead by Sarah Anne Langton and The Remover of Obstacles by James Brogden in particular although I felt the latter suffered somewhat by being a wee bit too contrived for its own good. I have to say some of the stories were a bit too long as well, short stories should never feel as if they're dragging but I felt that this was unfortunately the case here on a couple of occasions.
The stand outs for me among the remaining stories were The Other Woman by Chris Barnham which is a ghost story with some nice twists along the way and Mark West's The Witch House in which Mark displays his talents for creating a nostalgic view of eighties childhood, something he did to supreme effect in his Spectral chapbook What Gets Left Behind. My only criticism of the story is that it feels more of a vignette than a stand alone piece but when it conjures up those childhood feelings and  fears of the "haunted house" (every town has one, at least when you're a kid...) it's a minor quibble.
Urban Occult is a strong collection of stories with a mixture of styles which should appeal to fans of out-and-out horror and fantasy alike.
Posted by Anthony Watson at 10:27