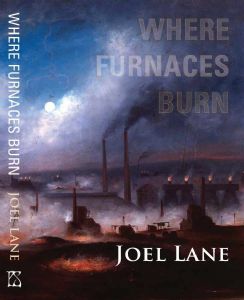 Where Furnaces Burn is a collection of stories by Joel Lane and is published by PS Publishing. There are twenty six stories in the book, all told in first person narrative and chronicle case studies of a policeman (enigmatically anonymous) working in the West Midlands. It's a stunning collection and is at the same time possibly the bleakest thing I've ever read.
The stories within these covers will take you to some very dark places and, in many instances will leave you there, many of the stories in here are open-ended, lack resolution, anyone looking for straightforward procedurals with neatly tied off denouments are going to be seriously disappointed. However, anyone looking for beautifully written prose examining the darkest reaches of human nature are going to revel in the goods on display here.
The first person narration turns this collection into more of an extended stream of consciousness. There's much abyss gazing here and, because the abyss does so much more than simply gaze back, the narrator becomes the most unreliable of his kind, casting a massive air of ambiguity over what he is describing.
The theme of decay runs throughout this collection, urban decay, the decay of society, the decay of the individual. The smell of rotten buildings is mentioned in many of the stories, descriptions of patches of mould and damp are rife, all serving to create an atmosphere of desolation, the external environment reflecting the inner turmoil of the narrator. It's a long dark night of the soul and there are very few moments of lightness, the  only humour present the in-joke of having two PCs named McMahon and Bestwick.
There's horror here aplenty, a supernatural aspect to the cases and the concept of a gradual descent into Hell with contact being made via arcane rituals, damaged individuals and portals appearing amidst decaying buildings. "There was no room for the unknown" the narrator tells us in the opening story, trying to explain why he chose the police as a career. The phrase reads as naive on first encounter, on completion of the book its irony is profound.
Where Furnaces Burn is a demanding read, disturbing and utterly bleak. The writing is superb though, poetic even (my favourite line compares a hole in the floor to "an infected wound in an old man's foot") and is as effective in describing the breakdown of the narrator's relationships as the supernatural entities and forces he comes up against.
Highly recommended.
Posted by Anthony Watson at 12:02