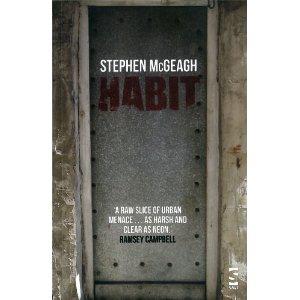 Habit is the debut novel from Stephen McGeagh and is published by Salt Publishing. First novels can be a hit-or-miss affair sometimes (and are the subject of an excellent article by Nicholas Royle - who has himself had work published by Salt - which can be found here) but on the whole I've been impressed with recent (and not so recent, retrospective viewings of) examples I've come across. Notable examples have been Adam Nevill's Banquet For the Damned and Joe Hill's Heart Shaped Box both of which I compare favourably with what I think is the best debut horror novel ever, Clive Barker's The Damnation Game.
I became aware of Habit by way of an online recommendation by Gary McMahon. If he was blown away by the darkness and bleakness of the book then it was one I certainly had to experience for myself, to see if I would be equally as impressed.
Impressed is an understatement. Habit is a short novel but it wasn't just the word count which made me  read it in one sitting, the narrative and, more importantly, the writing itself meant I couldn't put it down until I'd finished the whole thing. Another favourite first novel of mine is Irvine Welsh's Trainspotting and there are similarities between Habit and that novel in terms of the characters inhabiting them but they also share an amazing narrative voice (or voices in the case of Trainspotting...), both are written with great style and confidence, both have distinctive prose that makes them something very special indeed.
Habit is a clever title, and fits the novel beautifully. It describes the existence of Michael, the first person narrator of the book whose life revolves around trips to collect benefit and the pub, the latter with his friend and sister. It's also an obvious reference to drug use and addiction, a theme the book moves into in its second half, although not in the way that might be expected.
Despite its brevity, Habit manages to cram a lot in. It's a post modern dream in that it blends genres, and does so seamlessly. From gritty, urban realism the story segues into horror, (and I mean proper horror) but it's testament to the skill of the writer that this transition in no way feels clunky, gimmicky or somehow tacked on. The events that unfold seem like an entirely natural progression from the narrative that preceded it.
Habit is dark, bleak and uncompromising. There aren't many (or any...) likeable characters in it and many horrible things happen within its pages.
I loved it.
On the basis of this first novel, Stephen McGeagh is destined for great things. I for one am looking forward very much to his next publication. Habit will take you to places you really don't want to go to but trust me, stick with it, the journey is absolutely worth it.
Posted by Anthony Watson at 14:59