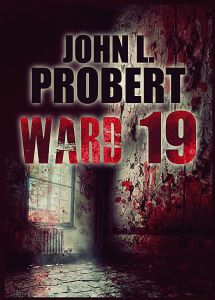 Proberty  a. horror writing in the style of grand guignol, with a rich vein of dark humour.

There's no such word as proberty of course, but there should be. John Llewellyn Probert has carved out a niche for himself in contemporary horror writing that surely makes him worthy of his own adjective. (The campaign starts here...) Ward 19 is the latest offering from the master of the finely crafted horror story and is another thoroughly enjoyable trip to the darkside.
It's the first of what I'm hoping will be a series featuring CID coroner Parva Corcoran. It's set in St Margaret's Hospital and concerns the activities of a serial killer whose M.O. involves removing strips of skin from his victims. It's a novella and as such involves packing a lot into a short running time, necessitating the use of much exposition and it's to John's credit that he manages to achieve this without it coming across as clunky and annoying.
The medical terminology rings absolutely true and I had to smile when I read about the white sheets draped over the boxes used to transport bodies to the mortuary in an attempt to disguise them, the same thing is done in the hospital I work in and no, nobody is fooled...
The plot rattles along at a cracking pace (although, it has to be said, doesn't involve a great deal of investigation) and is just gruesome enough without being simply gross. The killer is suitably deranged as are their motives and there's plenty information given on Parva's back story to intrigue the reader.
The "cover" of the novella is a joy to behold, (part of me wishes hospitals really did look like this instead of the bland shopping malls the PFI culture has created - if they did it would certainly reduce the number of malingerers...) so it's a shame the story's only available electronically (here) as it would make an impressive addition to anyone's bookshelf.
Ward 19 was a joy to read and I look forward to more adventures for Parva. For a long time to come...