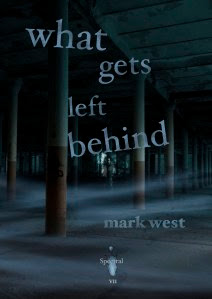 What Gets Left Behind is the latest chapbook from Spectral Press who are consistently publishing some of the best horror around at the moment. High standards have already been set in this series of chapbooks (this is number 7) so the question is whether this new story by Mark West maintains those standards. The answer is a resounding yes, something that will come as no surprise to anyone who's read any of Mark's previous work which I compare favourably to that of Stephen Bacon, sharing as it does a subtle, understated quality, brilliantly capturing the feelings and emotions of the characters within the stories.
What Gets Left Behind tells the story of Mike Bergen who has returned to his home town of Gaffney ostensibly to attend a works conference nearby. The true reasons for his return run much deeper however, Mike is there for closure, to put the ghosts of the past to rest so to speak, after a childhood tragedy.
The middle section of the story recounts those childhood events and demonstrates a great strength of Mark's writing with his ability to paint a truly nostalgic picture of childhood summers which seemed to last for ever, the days when it rained memorable because we had to entertain ourselves indoors...
This section however raises my only criticism of the story, the criticism being that it just wasn't long enough. True, I wanted to wallow in nostalgia a little bit longer but aside from that I felt that this section was a little rushed, cramming a lot of narrative into a short space. This is of course a short story and had to be tailored and edited to fit the chapbook format. I do feel though that the story does deserve a longer treatment, the events in the Gaffney of the 1980's would definitely benefit from another visit, the "Rainy Day Abductor" (whose activities impact on Mike's own tragedy) is a character whose story could definitely be expanded on. Gary McMahon is currently turning his Spectral entry What They Hear In The Dark into a longer format, I'd love to see Mark do the same with What Get's Left Behind.
What gets left behind in this case is guilt, the guilt that Mike feels over what happened to his best friend all those summers ago. "You can't go home again" so says Thomas Wolfe, and in Mike's case these are wise words that he should have heeded. Fortunately for the reader he doesn't, allowing a climax that is just ambiguous enough to raise the question of whether it is truly a supernatural tour de force or simply guilt and memories combining in a terrifying psychological cocktail. Either way, it's brilliant.
What Gets Left Behind is another great piece of writing from Mark West and another (absolutely standard maintaining) quality production from Spectral.
Posted by Anthony Watson at 10:22