Beyond Here Lies Nothing. 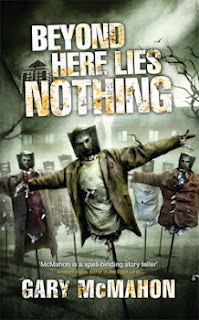 "Beyond here lies nothing" is a phrase coined by the Roman poet Ovid. Another poet, Bob Dylan, used it as a title for a song on a recent album. Now Gary McMahon has chosen it as the title of the concluding book in the Concrete Grove trilogy from Solaris Books. It's an ominous phrase, about as pessimistic as you can get, and the perfect title for a horror story. It's a fitting title too, given that this is the last novel set in the housing estate in North East England created by Gary which has provided some of the best horror writing of the last couple of years.
As with the two previous books, the main characters in the narrative are different (aside from the Grove itself of course...) this time around they are Marc Price, a journalist researching a book on the "Northumberland Poltergeist", Abby Hansen, the mother of Tessa whose abduction as one of the "Gone Away Girls" has left her emotionally scarred and full of self loathing. DS Craig Royle is the policeman obsessed with the abductions whilst Erik Best, local gangster and bare-knuckle fight "promoter" from Silent Voices takes the last narrative strand.
There are cameo appearances by some of the characters from the earlier books (including one very surprising one) although the chapter given over to Tom Stains, the conflicted hero of The Concrete Grove seemed to me a bit over the top, the mention in passing he also gets later on would perhaps have been enough. A minor criticism though, and the only one I have to make...
One character making a very welcome return however is Captain Clickety, the tall, cloaked figure with the beaked face who this time around gets a back story of sorts. He (it?) is linked to the Northumberland Poltergeist and also, in a departure I very much enjoyed, to the "Lost Colony" of Roanoke in the 1500's. Clickety is a great creation and I have a feeling he may well crop up in some future short stories set in the world of the Concrete Grove. At least I hope so. This book is a fitting climax to the series but it would be a tragedy if there really was nothing beyond here with regards to stories.
The role of the third book in a trilogy is to tie everything up and Beyond Here Lies Nothing does this brilliantly. The whole parallel world concept has been developed throughout the series, the idea that the Grove is a doorway, a portal to this other world, a doorway to creation and these ideas are brought to stunning fruition in a climax that is as brilliant as everything that has gone before. There's great imagery in here - yet again - scarecrows are second only to clowns in the "scare the shit out of you" stakes and that fact is put to extremely effective use in this book. The fate of The Needle itself taps into imagery that has been burned into the subconscious of the whole world.
Gary McMahon has created an astounding series of books in the Concrete Grove trilogy. They truly deserve to be called classics. Each of the three books can be read as stand alone novels and enjoyed as such, but they are best appreciated as a whole, the ideas and story arcs that run through the three books are subtly introduced, cleverly developed and brought to an entirely satisfying conclusion in Beyond Here Lies Nothing.
Brilliant. Just brilliant.

Email ThisBlogThis!Share to TwitterShare to FacebookShare to Pinterest
Labels: Beyond Here Lies Nothing, Gary McMahon, review