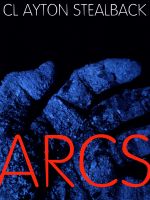 Arcs is a short story by Clayton Stealback and is available for download from Smashwords here. I've been a fan of Clayton's writing since our paths first crossed (virtually) on the now defunct Horrorwriters.net forum. If you want High Concept then Clayton's your man, the stuff that comes out of his head is evidence of a fertile imagination at work and this is once more evident in Arcs.
Isaac is cursed - or so it seems. He exerts a malign influence over everyone he comes into contact with, including his foster parents whose story is told in flashback, beginning with worrying signs involving cheese and ending in tragedy - a sentence I guarantee you've never seen before but which will hopefully pique your curiosity enough to download the whole story.
The story begins with a wonderfully atmospheric set piece which is nicely referenced at the story's conclusion with a lovely metaphor. It's main thrust concerns Isaac's attempts to track down his real father and discover the origins of his "curse". Given that this is a search for information, the risk of the exposition fairy working overtime is high but Clayton manages his way around this extremely well, structuring the story so that the reader isn't overwhelmed with information and discovers the true nature of Isaac's "affliction" piece by piece.
It's a clever concept, extremely well executed and even introduces an air of ambiguity (and some supernatural overtones) towards the climax.
The character of Isaac is well drawn - at first a sympathetic victim but, over the course of the story, becoming something else entirely.
Arcs is an imaginative, atmospheric and thoroughly entertaining story from a writer with great potential.
Posted by Anthony Watson at 11:51