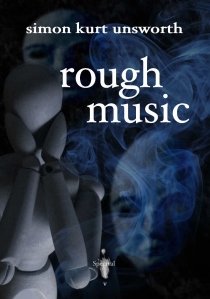 Rough Music is the latest chapbook from the consistently brilliant Spectral Press, another high quality offering from the workshops of Simon Marshall-Jones and is the creation of Simon Kurt Unsworth. Quiet Houses was one of my favourite books of last year so it was with a great deal of anticipation that I waited for this to drop through my letterbox.
The story involves Cornish, a man with a guilty secret, one which is threatening to destroy his marriage. His sleep is disturbed by the appearance, in the middle of the night, of a strange figure a wearing papier-mache mask and banging a pan with a spoon. (Creating the rough music of the title).
That's quite a surreal image but one which - in the hands of a brilliant writer like Simon Kurt Unsworth - manges to be entirely disturbing. As the story progresses, the figure is joined by others, similarly masked, who join in the "music" and then begin acting, and interacting, in increasingly bizarre and disturbing ways.
The figures are of course manifestations of the turmoil in Cornish's mind. Guilt is a terrible burden, it takes over every thought process, a constant presence that nags away in the background, influencing emotions and actions, destroying relationships and the author brilliantly captures the mental breakdown of the protagonist, the surreality of the nightly shows a metaphor for his inner turmoil. The demons in his head made flesh...
It's a marvellous character study, written in crisp, clear prose but it's also a deeply unsettling tale. The imagery created really is disturbing (the story references Frank Sidebottom and I have to admit this is the image I had in my head when I first read about Cornish's nocturnal visitors - I always found Frank a bit creepy, and this story mined those concerns).
I've spent a lot of time recently reading "psychological" horror stories in preparation for the Darker Minds anthology so it's a tribute to this story that I enjoyed it so much after so many stories sharing a similar theme.
Rough Music is a classy piece of writing and another fine contribution to the Spectral Press back catalogue, maintaining the high standards set by the previous publicatiions.
Posted by Anthony Watson at 14:30