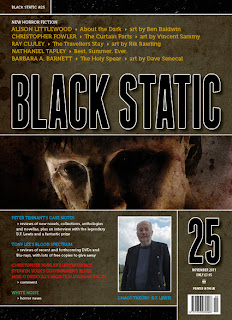 About The Dark is the first story in issue 25 of Black Static and is by Alison Littlewood. A trio of truanting kids take shelter in "Dark Cave" from the rain... A - on the face of it - somewhat cliched beginning to a horror story. What follows, however, is far from cliche, is in fact a cleverly written character study, a coming of age story with - it has to be said - "dark" overtones.
What the kids discover in the cave is - The Dark, and it's as much a character in the story as the three teenagers. Adam is the key figure in the story and it's his change that the story's all about. there's a nice touch of ambiguity in the story - is the dark a real, supernatural presence or is it already inside Adam, waiting for the right moment to assert itself? It's an excellent story and a really strong opener for this issue.
The Curtain Parts is by Christopher Fowler and tells of "Estuarine" June who is flat-sitting for a friend in what turns out to be a very strange apartment block. What unfolds when the lights go out is a surreal nightmare involving anatomical dummies and bondage. (Which has to be the strangest sentence I've ever written). There's a feel of Rosemary's Baby about the story in the way it creates the unsettling atmosphere of a stranger in a new building filled with bizarre characters. It's a scathing indictment of the class sytem... I think. Simon Bestwick's Welcome to Mengele's told of those with enough money indulging in their most depraved fantasies and there's a similar theme at play here. Very strange, and very disturbing.
The Travellers Stay is by Ray Cluley (or Mr Black Static as I'm sure he'll be come to known if the league table of contributors is anything to go by) and will have all those who regard Eats Shoots and Leaves as a bible frothing at the mouth at the lack of apostrophe in the title. Ah well - read on and stop frothing, the title's actually a clever play on words which will become apparent as the story progresses. Like About The Dark, it starts on a bit of a cliche with a family arriving at a seedy motel. Like the other story though, it becomes so much more - or should I say it metamorphoses into something quite different? The writing at the beginning of the story is brilliant, perfectly describing the tensions between the family members. (Which is not to say that it's not well written through the rest of the story - it is - it's just that the opening is particularly effective). It's another surreal trip but an extremely effective one.
What would you get if you crossed Richard Wagner with Richard Matheson? Anti-semitic vampires wandering the streets of Los Angeles? A Valkyrie riding the wing of a plane, slowly picking the engine to bits? Or maybe The Holy Spear by Barbara A. Barnett - a post-plague-apocalypse story set in Philadelphia. The story borrows heavily from I Am Legend and Parsifal - the latter more directly with scenes lifted directly from the opera and the general theme of a Grail Quest - in this case finding a cure for the plague. The story references the opera directly so it's not being sneaky by nicking the story and presenting it as something new but, as with any "reimagining" of stories, the new version has to bring something new otherwise the whole idea is redundant. This is a readable story but there's nothing particularly new or innovative about it. I guess I'm predisposed not to like remakes as there's always that feeling of the author using someone else's imagination to their own ends. That said, Apocalypse Now is oneof the greatest films ever made and that's just Heart of Darkness in Vietnam. (Mind you, it does have that helicopter attack with that stirring music by - oh, who was it again?)
Best. Summer. Ever. is by Nathaniel Tapley and is basically a comedy monologue written down. It works well, and is clever, managing to create a strong character despite its short length and format and slowly introduces a very dark storyline. The monologue is an effective comedy device, very inclusive of the audience who fill in the gaps. I'm old enough to remember Bob Newhart whose stock in trade was the monologue but I have to say my all time favourite is this classic by Mark Gatiss from The League of Gentlemen.
All in all, another really strong issue.
Posted by Anthony Watson at 14:31